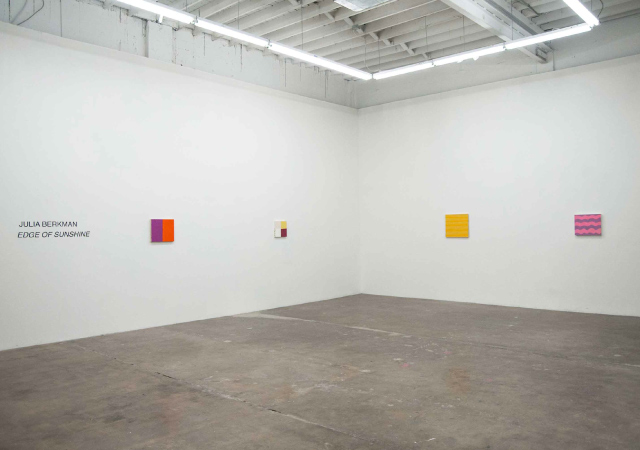 Fredric Snitzer Gallery is showing Edge of Sunshine, a solo exhibition by Julia Berkman. For her first exhibition at the gallery, Berkman presents a selection of small to mid-size acrylic and oil paintings on canvas. The works in the exhibition combine the formal tropes of Minimalist abstraction with more overt painterly signifiers to claim a space between painting as a vehicle of presence and painting as a tool of visibility.

The general material mechanics of painting are visible as empathic reminders of the body and of the medium’s now-gone reflexive capacity. The marks assert the characteristics and limitations of the brush in imperfect contours and uneven applications of paint, retaining evidence of paint’s once-liquid status. This linking of visibility to bodily trace is at odds with commercial notions of visibility as branding and depicted content.

The formal elements are reduced, often simple linear or rectilinear compositions on a color field, and differentiated through subtle calibrations of hue and chromatic intensity. The shapes themselves are serially repeated in compositions that loosely adhere to the support’s basic structure. These shaky edges and just-off geometries trade in the chance for any Albersian glow or deducible structure – Modernism’s optical payload – for a counterintuitive, inefficient form of visibility. By invoking the logics of presence and visibility, only to botch their delivery, Berkman’s paintings resist becoming objects of ideology.

Julia Berkman was born in 1976 and lives and works in Boston, MA. Berkman received a Bachelor of Arts in 1999 from Swarthmore College. In 2007 she received her Masters on Fine Arts from Rutgers Mason Gross School of the Arts.