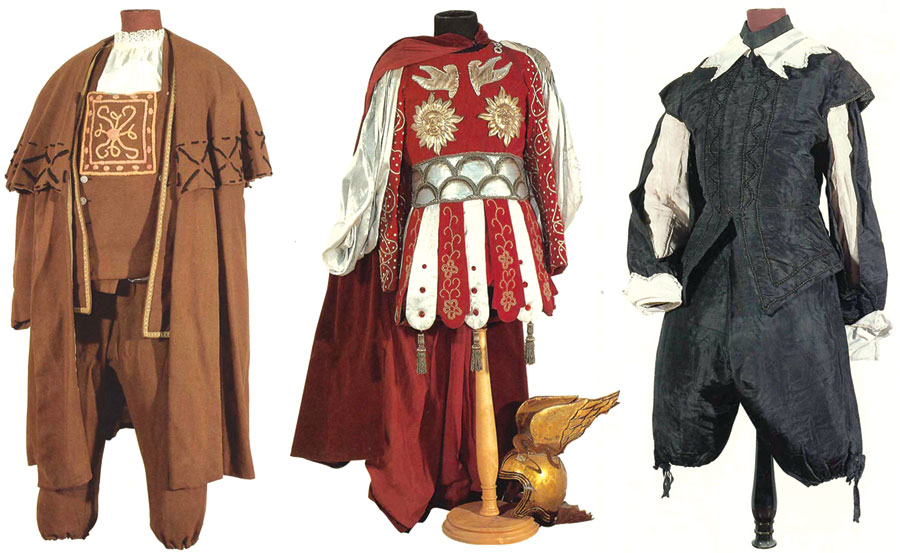 I walk the few blocks from the parking lot near Miami’s Bayside and the iconic Freedom Tower in downtown Miami on a day in which the temperature could not have been lower than 98 degrees. The streets are loud, the air is sticky, and the people that usually fill the downtown streets with cheerful Miami spirit are missing; it is a typical downtown weekday. However, the nature of my visit keeps me focused from the heat and excited for what I am about to see. I am on my way to the 100 Años Vistiendo a Calderón (A Hundred Years Dressing Calderón) exhibit, a part of the International Hispanic Theater Festival, in the Freedom Tower’s museum.

I enter the exhibit and am instantly transported from the hot Miami streets into the elegance of the Spanish Golden Age. I am greeted by 40 lavish costumes and 10 plotted designs once active in a variety of productions of any one of Pedro Calderón de la Barca’s original plays. The costumes range from periods of the first avant-garde movements in Central Europe to the more recent designs of Miguel Narrows and Andrea D’Odorico. Details are the main focus of this exhibit as the display allows for a closer look at the costumes, the intricate stitching, and elaborate handwork involved in their creation. Along the walls of the exhibit’s halls, a brief biography of the playwright and the origin and meaning of his plays fuels my interest in the costumes.

The product of a Jesuit education and upbringing in 17th century Spain, Calderón’s plays hold religion at their core. The theme of good and evil and God’s ultimate triumph is characteristic to the playwright’s works and is reflected in the execution of their characters’ costumes. Calderón is most famous for his one-act religious plays, called auto-sacramentales. The characters of these short plays are rarely human, but rather personifications of the virtues and passions of the religious mind; Sin, Faith, the World, and Gluttony are just a few of the characters whose costumes form part of the exhibit. The costume of the World, for example, from Calderón’s “El Gran Teatro Del Mundo” (The Great Theater of the World), displayed at the exhibit, stands out from the rest. At first glance the costume seems to resemble a typical Calderón male costume, however, an incredible cape with the world painted on its surface surprises me as I catch my first glimpse of the back. A closer look mesmerizes me as the detailing, again, seems almost unreal.

It is a quiet and peaceful hall that the costumes call home, but their histories make me feel as though I am backstage at one of Calderón’s productions in 17th century Spain. I can almost feel the scrambling of actors running lines, getting dressed, hastily gathering props before their awaited performances and as I reach the end of the exhibit I wish I were front row on opening night.