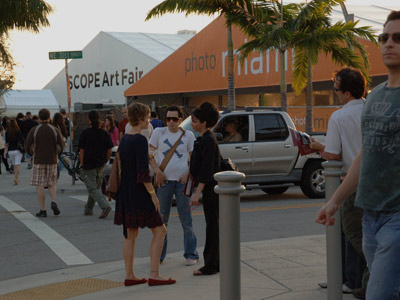 The most pedestrian friendly conglomeration of fairs were located at the stalled Midtown Miami development where, the Bridge, Red Dot, Art Miami, Photo Miami, Scope, Art Asia and the Green art fairs all pitched tents. There was plenty of parking nearby and unusually thin traffic compared to recent years.
During the buildup to last December’s Art Basel Miami Beach, many local dealers were holding their collective breaths fearing that a full-blown recession would impact what has become arguably the planet’s largest arts confab in dire fashion.

To the surprise of locals and visitors alike, ABMB and many of the satellite fairs across town fared better than imagined with Pulse and Scope reporting record turnouts and brisk sales. Not since Art Basel Miami Beach’s debut was torpedoed in 2001 following 9/11, had so many Baselites expressed such baneful concerns. This year the terror was expected to arrive in the form of a global economy teetering on the brink of Chapter 11 instead.

Miami dealer Gary Nader, who boasts “the world’s largest private gallery 50,000-square-feet with a collection surpassing $100 million in value,” predicted a drop in attendance at the Miami Beach Convention Center, housing the main event, and empty hotel rooms back in October.

He noted that the collectors who would make the ABMB pilgrimage would stick to “blue chip works by modern masters,” and that “young artists would suffer as a result.” He also mused that the smaller fairs would take a huge hit and that local spaces would “soon begin to fold.” Even Jerry Saltz, former art critic for The Village Voice and a columnist with New York magazine, was scheduled to give a lecture titled “This is the End: The Rising Tide of Money Goes out of the Art World and All Boats are Sinking” at an official ABMB event.

But despite all the gloom and doom, most forecasts seemed to have missed – although to Gary Nader’s credit, Miami Beach hotels took a hit with plenty of empty rooms –  and the parties and conspicuous consumption associated with the vaunted winter event in recent years were scaled back like never before. Southern Wine & Spirits, which traditionally keeps the booze flowing at Art Basel-sponsored blowouts, reported that liquor orders were down 20 percent from last year. And, Miami’s uber luxe Galerie Emmanuel Perrotin has announced it will shutter its doors.

But, in the end, amid all the bug-eyed angst and hand-wringing over poor auction sales at Sotheby’s and Christies this fall, cited by many as a prognosticator that the art market was on the verge of collapse, collectors did show up, did party in paradise and did purchase art even though this year’s ABMB was a noticeably subdued affair.

Some of the more unusual offerings at the main fair could be found at Art Basel Miami Beach’s Art Positions where the Newman Popiashvili Gallery out of New York featured an installation by Mexican artist Raul De Nieves. He exhibited these incredible paper plates with collages of crazed clowns fashioned from cake sprinkles that looked as if made by serial killer John Wayne Gacy on a Dopamine rush. The pieces were going for an astounding $1,600 bucks.

Despite news that UBS, ABMB’s chief sponsor, had been bailed out by the Swiss Government to the tune of $60 billion last October, and that, in November a federal grand jury indicted Raoul Weil, the company’s chairman and CEO, of the global wealth management and business banking division for helping U.S. taxpayers avoid income taxes on assets in overseas accounts, the Swiss banking giant has committed itself to continue patronizing ABMB the next few years. Better still, fair organizer MCH Swiss Exhibition Ltd., has signed on at the Miami Beach Convention Center the next three years squelching persistent rumors the mega-fair might be headed to Los Angeles.

On the mainland, Pulse Miami, which organized its biggest edition to date with nearly one hundred international galleries under its roof, reported solid sales and steady crowds. “While it was not the feverish, trend-oriented seller’s market of 2007, all our dealers said that buyers were serious collectors who carefully selected art, often placing reserves that were finalized later in the week,” Helen Allen, the fair’s executive informed, adding that twelve thousand people visited the fair over the course of its five-day run. Nick Lawrence, owner of New York gallery Freight + Volume, reported a sold-out booth and commented that, “surprisingly, this fair turned out better than last year’s. It’s renewed my faith that the art market follows its own rules. A lot of deals were closed after midnight at the Raleigh and Le Baron.”
“One trend noted by multiple galleries at Pulse – Allen added – was an interest in new media works, particularly videos mounted in artists’ frames, which were snapped up by buyers.”

These included Bitforms Gallery, whose booth sold out of a video “shadow box” by Rafael Lozano-Hemmer, which began at $90,000 while Angles Gallery experienced heavy sales of Ori Gersht’s Falling Bird, an edition of eight that began at $45,000. Local dealer Anthony Spinello, who had a booth at Pulse, said he nearly sold out of work by Miami’s Lee Materazzi. “She sold super well,” noted Spinello of the photographer who has been snapping people with their heads stuck in strange spaces for her latest series. “I sold 30 of her photos for $1,500,” he informed rightfully.

The most pedestrian friendly conglomeration of fairs were located at the stalled Midtown Miami development where, the Bridge, Red Dot, Art Miami, Photo Miami, Scope, Art Asia and the Green art fairs all pitched tents. There was plenty of parking nearby and unusually thin traffic compared to recent years and people flocked there in droves.

At Scope, Obamamania broke out with several artists creating images of the hope-peddling 44th President as if his mere presence would serve to kick start sales. It seemed to work.

At Scope’s entrance a sprawling mural by street artist Mr. Brainwash depicted Barack Obama as a post modern superman in tights. Inside at Galerie Orel Art, artist Stephen Shanabrook touched on issues of race with wall-swallowing works superimposed with the words: “My President is Black, Your President is White.” Adding major flair, not to mention zany fun to Scope was Fun House, a huge installation commissioned by the fair’s VIP area from Miami conceptual tag team Friends With You, comprised of Sam Borkson and Arturo Sandoval III. They created a colorful bounce house were adults and kids romped together with abandon during the fair. They also created a walk-up bodega and small gallery selling their designer toy collectables, t-shirts, sculptures and prints in what was hands down one of the most successful additions to Scope.

While some dealers like New York’s Priska C. Juska lamented “sales are off. This is nothing like last year. But we are getting good people to come and hoping they will return to buy,” others boasted steady sales.

London’s Fine Art Society sold a painting by Keith Coventry for $40,000 and another by Steve Goddard for $28,000 while New York’s Creative Thrift Shop sold several photographs by Victoria Campella in the $2,000 range of men whose midriffs were covered by paint splattered shirts scrawled with famous artists names. Overall, the enthusiasm for ABMB was unabated and local museums responded with stellar shows, many which will remain open through spring.

Incredibly close to a dozen new galleries opened in town leading into ABMB reflecting that Miami remains a choice destination for players that want to become part of the thriving local scene. Signs are pointing that despite the doldrums hanging over the art market like the sword of Damocles, it will take more than gloom-mongering  and a broken economy to suck the wind out of Miami’s Art Basel dreams.