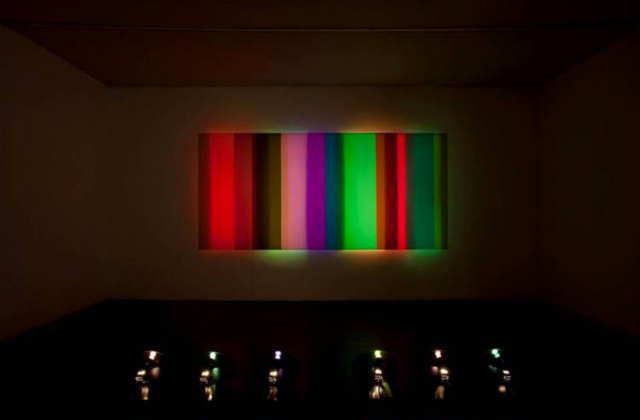 Alejandra von Hartz Gallery is presenting the exhibition “The Eyes, Sometimes”, the first solo exhibition by artist Karina Peisajovich in the United States.

With a diversity of media such as installation, drawing, photography and painting, the Argentinean artist decodes the machinery behind representation, focusing on the idea of light, darkness and color as the grounding substance giving shape to the world of images. She structures spaces to achieve heightened perceptual experiences in which visitors become acutely conscious of their individual eye as a perceiving entity. Her time-color environments engage viewers with a simulated pre-image state where they may recognize their own processes of visual construction.

The exhibition will feature a light installation as well as a series of drawings and photographs. One of the stories that inspired Peisajovich to produce these pieces is the documented dispute between Newton’s and Goethe’s theories. The Romantic poets of the time criticized Newton’s decomposition of white light as he destroyed the poetry of the rainbow by reducing it to prismatic colors. The scientific explanation of this phenomenon was a turning point to elucidate the difference between chemical colors (pigments) and physical ones (light).

Karina Peisajovich was born in Buenos Aires, Argentina in 1966, where she currently lives and works. She studied at the National School of Fine Arts Prilidiano Pueyrredón Buenos Aires (1988), and later she participated in residencies such as the Guillermo Kuitca Program for Artists at Fundación Proa in Buenos Aires (1994-1995) and ART OMI in New York (1999). She also received a Argentine National Endowment for the Arts Creation Grant, and a Fulbright Commission Fellowship to participate in the International Studio & Curatorial Program (ISCP) in New York (2002).