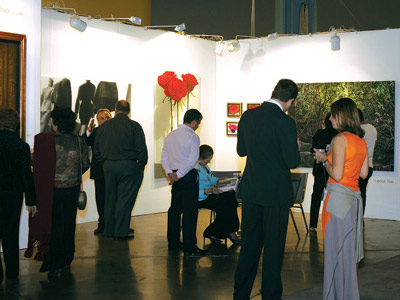 Arteaméricas, the fair that defines trends of contemporary art by Latin American and Caribbean artists, took place on March 27th through March 30th, 2009 at the Miami Beach Convention Center. This art fair, unique in its concentration of cultural and ethnic artwork, housed a variety of booths with displays by about 50 participating galleries from around the world.

In its seventh consecutive year, 2009 Arteaméricas was a four-day presentation and cultural exchange of established and emerging Latin American and Caribbean talents. I had the pleasure of attending Arteaméricas’ special preview night on March 26th, 2009. This night, a sort of pre-opening celebration for the days to come, was filled with an air of anticipation, excitement, and ultimately, satisfaction. The 50 or so participating galleries’ rigorous work and preparation was evident in the selection of their displays.

A great deal of importance is given to this particular fair as Dot Fiftyone gallery co-director Alfredo Guzman explains, “Arteaméricas confirms the existence of a local market in Miami and the desire to sustain the city’s cultural scene when sometimes disappointing forecasts trigger a more driven necessity to avoid losing what we have already accomplished.” Painting, sculpture, multimedia art, and installations filled the small and often shared booths the galleries homed for the duration of the fair. This maze of gallery spaces was overwhelming in the most spectacular way with a chance of discovery at every turn. Excellently curated pavilions were a focal point of the fair, giving Cuba, Mexico, and Argentina their own little corner at Arteaméricas.

La Habana Pavilion: Two Visions of Cuba curated by Gean Moreno and described by fellow curator David Mateo as “Past and present, aspiration and nostalgia,” housed works by Cuban based artists Kadir López and Ernesto Fernández, as well as expat Cuban artists such as Magdiel Aspillaga, Manuel Pina, and Alexandre Arrechea, among others. Not far from La Habana, curator Eva Gristein’s Buenos Aires Pavilion: Straight from Argentina, served as a gathering point for four established artists of different galleries from around Buenos Aires to join in their passion for the interpretation of the organic, landscape, and nature. Mexican Pavilion: Sublimated Tradition, put together by the Pavilion’s selection committee, housed and exhibit from The Mexican Cultural Institute in Miami. Works by Miami based Mexican artists such as Alekxey Sabido, Cecilia Rivera, and others, tied the pavilion with a common theme of the “Two Worlds” (Mexico and Miami).

Home to so many galleries, such as Diana Lowenstein Fine Art, Dot Fiftyone, and Cernuda Arte to name a few, dedicated to representing Latin American art in the United States, Miami serves as the ideal location for an event like Arteaméricas. Locals and visitors shared the unique experience of standing in an incomparable convergence of Latin American and Caribbean Art. The fair honored the established and sponsored the emerging, offered conferences, sculpture, and video art project rooms, making this year’s Arteaméricas, directed by Leslie Pantín, the fair’s president, and Emilio Calleja who served as Vice President, even better than the last.