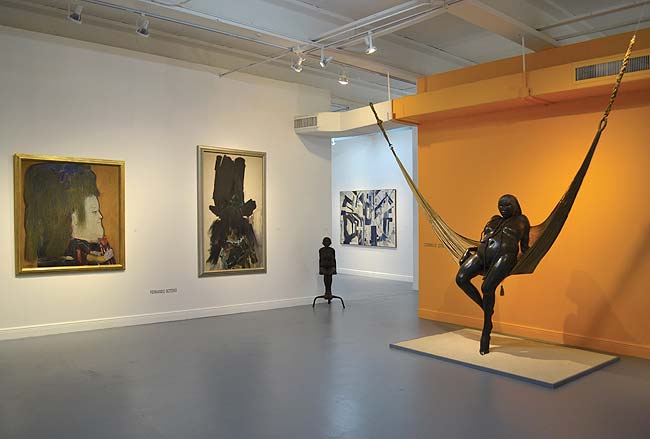 Apart from the major institutions here in Miami (MAM, MOCA, Bass and the private collections), it’s rather difficult to get up close to works by internationally established artists, considered masters in their own country. In Wynwood, the Ascaso Gallery breaks that spell.

With locations both in Miami and Caracas, Ascaso presents important works from Carlos Cruz-Diez (presented in a color-frenzy solo exhibition at MAM last year), Victor Valera (who worked alongside Victor Vasarely, Jean Dewasne and Fernand Léger in their Paris studio), Fernando Botero (his ‘fat figures’ have become part of the immediate contemporary art consciousness, and he’s still working), and over 70 other artists from the Latin Americas.

Now the challenge becomes real: with a plethora of artists from an unknown market, how does a gallery make the sacred connection of cultural and monetary exchange at the foundational level? Gallery director Guigui de la Torre answers quite matter-of-factly, “There is no single way to achieve such a task. It is by taking small but firm steps that we can diffuse this information.” Naturally, within months of the gallery’s opening, they elect the most powerful option for new galleries in Miami: the art fairs circuit. “We are constantly evaluating our best options to educate our patrons,” de la Torre continues, “within those options, we are currently coordinating lectures, guided visits and other channels to help promote the gallery and Wynwood.”

A mere eight months after its opening, Ascaso has become ‘required reading’ for those discovering the vastly diverse Wynwood landscape. It’s first exhibition brought out the heavy-hitters; those artists who would, more than likely, register with experienced Latin American collectors and critics alongside North American and European viewers who might only have known about them via word-of-mouth or the occasional press snippet. For Miami’s audience, however, Ascaso displayed impeccable timing with a show from Cruz-Diez, Valera, Botero and Jesús Soto. De la Torre relays the reaction of a German visitor’s comment on a 1967 Cruz-Diez work, Physichromie, during Art Basel Miami Beach last year, “I am not familiar with this artist’s work, but I know I must be in front of something very important, which deserves a lot of respect.” That is a connection that neither press nor power can purchase: a contemporary gallery, not yet fully entrenched into its new community, is somehow capable of communicating its dedication to their artists and their curatorial aims to visitors foreign and domestic.

The next step? Maintaining that forward motion as Miami rolls into a new year and the renewed tidal wave of international attention that inevitably follows Art Basel Miami Beach. “As to specific details for the season,” de la Torre says, “we’d rather let you know… it’s a surprise.”