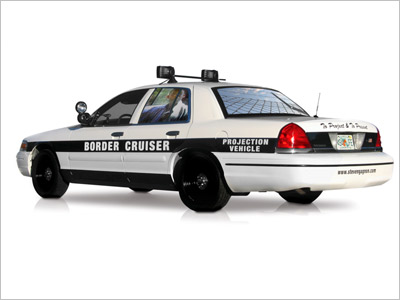 Steven Gagnon, a Miami-based artist, will be driving his Border Cruiser, a mobile video installation in a former police car during the week of Art Basel Miami Beach.
The video sculpture is the fourth project in an ever-expanding body of work and marks the first that maintains the full functionality of the automobile while the videos are playing. The artwork's intent is to heighten public awareness of the dangers and hardships that immigrants face to enter the country illegally to find work.

The mobile sculpture was shown earlier this year in Houston for Fotofest, the city's international photo and video biennial. It was also well received at both the Democratic and Republican National Conventions and garnered much press.

During Art Basel Miami Beach the Border Cruiser will patrol the streets all around Miami Beach and Miami’s Wynwood Art District from sunset to midnight.

The traveling exhibition History, Labor, Life: The Prints of Jacob Lawrence explores three major themes of Lawrence’s larger oeuvre and specifically focuses on his graphic work. Lawrence’s recording and recollection of African-American and larger African diasporic histories are featured, as well as his vivid observations of the dynamic city life in his native Harlem, New York City. Works in the exhibition span from 1963 to 2000 and include … +