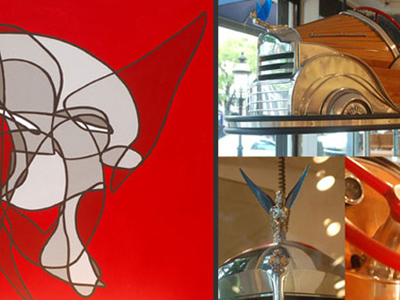 With an eclectic mix of contemporary artists the Butter Gallery, located at 3135 Commodore Plaza in Coconut Grove, officially opened its doors in August, 2007 in what is seen by many locals as a rebirth of the area as a place for the arts and entertainment. Master painters and emerging artists alike fill the gallery space with a variety of styles as wide as their age ranges. Cuban artist Francisco De La Torre III, 67, a student of the late Rolando Lopez Dirube has a long history of exhibitions, while the American Dylan Terry, 21, makes his gallery debut.

Inspired by the story of Edith Halpert, the Butter Gallery owner Francisco "Paco" De La Torre IV proudly offers every visitor his "tour" around the gallery and is always willing to interact with those that show interest in any of the works displayed. As he states: “Not only did Halpert’s Downtown Gallery predated the Moma, the Whitney and the Guggenheim and dared to sell American contemporary artists at the time, she was known for having a friendly atmosphere and a wide variety of prices and styles. Something that has been forgotten in today's (art) scene".

Among the list of artists participating on the First Show the gallery is especially dedicated to the promotion of Ross Ford and Phil Stapleton, who De La Torre exclusively represents. "I strongly believe in their work. We are planning a Ross Ford show in Paris for next year and Stapleton & Stapleton will be exhibiting in Dubai soon" says Paco.

August 4th will be the beginning of the Grove’s Saturday art events. Also on Commodore Plaza, Dharma Studio-Contemporary Art and Grove Gallery will join the Butter Gallery with extended evening hours the first Saturday of every month in this welcomed event. The recently opened Christabelle’s Quarter Restaurant will be offering a sample of their menu at the Butter Gallery on the opening night as well.