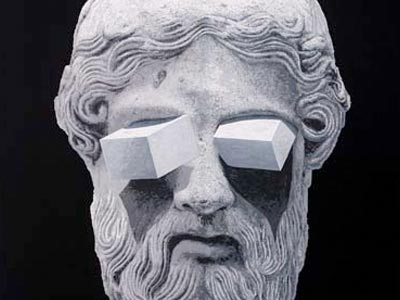 Daniel Arsham presents his latest solo exhibition, Alter, at Galerie Emmanuel Perrotin from December 1st to 31st, coinciding with Art Basel Miami Beach and its plethora of satellite fairs. This is the artist’s sixth solo exhibition and is made up of three series, all of which feature new work and continue to explore Arsham’s fascination with a wide range of themes, from architecture to abstract concepts like time and color.

The show’s opening reception includes a collaborative performance, Recess, between Arsham and New York-based choreographer Jonah Bokaer. This is a tradition at all of Arsham’s openings at Galerie Emmanuel Perrotin. “Most people are used to seeing a dance performance in a theater,” says Arsham. “Recess is a way to play around and explore.”

The performance follows another collaborative effort, Replica, which presented itself at the Arsht Center for the Performing Arts on November 13th. The performance examined movement, memory and amnesia through the incorporation of current technology involving E.M.D.R. (Eye Movement Desensitization and Reprocessing) testing.

Alter begins with a series of gouache on mylar drawings that were inspired by a recent trip Arsham took to Athens. These deconstruct popular sculptures from Greco-Roman antiquity and inject modern cubic structures into them to create something new. “I never used figures at all before,” says Arsham, “because I felt they would be tied to a specific time period.” By altering them in the drawings, he says, “I was able to dislodge them from time.”

“All the works are alteration of something we know already,” Arsham says of the exhibition. Where the gouache drawings, entitled Objects of Antiquity, alter history, Arsham’s Push Puppets alter childhood. Push puppets were popular toys from Arsham’s childhood that he recreated into full-scale sculptures, one of a deer and the other of a donkey. They collapse slowly over a short period of time before reanimating again and starting the cycle over. “It’s death and rebirth,” says Arsham, “all in two minutes.”

The final series that will be presented at Alter is titled Pixel Clouds. A few pieces were shown previously at a show at Galerie Emmanuel Perrotin’s location in Paris. Arsham took a number of pictures of clouds from his phone and blew them up digitally in order to see the individual pixels that made up the picture. Using these large photographs, he created large sculptures of individually painted plastic balls that reflect the pixilated clouds. Each reflects a unique view of a cloud based on the location the picture was taken.

From December 2nd to 4th, Arsham’s work can also be viewed in the Merce Cunningham Dance Company’s performance, The Legacy Tour, at the Adrienne Arsht Center for the Performing Arts. He will transform the theater’s auditorium into an avalanche of geometric solid shapes, while guests gather on stage for a 30-minute modern dance piece. Alter, however, will be the definitive spot to take in Arsham’s latest works, which are a must see during Miami’s biggest fine art season.