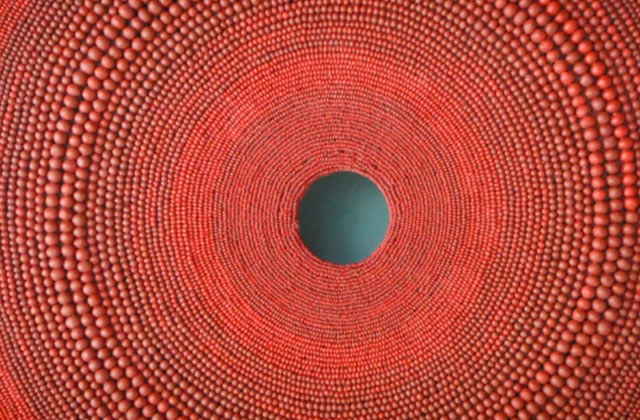 Xawery Wolski’s Thoughts, Meditations, Acts is a continuation of the artist’s experimentations with terracotta, bronze, steel, seeds and natural fibers searching for ways to meld them organically while infusing them with a spiritual, complex and introspective energy. Although his method may be described as an interpretation of contemporary concepts and theories through the use of traditional handcrafting techniques, his art necessitates an understanding beyond the materials used.

The conceptual thread found in his work is an evident interest in bridging media, artistic heritage and personal obsession. “I understand that we have a need for liberty and happiness; that we seek love, connection and approval; that we fear illness, bad fortune and death; that we base our beliefs and our gods upon these principles. And ultimately, no matter our cultural, social or moral models, we yearn to communicate.”

Wolski was born in Warsaw in 1960, where he attended the Academy of Fine Arts from 1980 to 1983. He later lived, studied and worked in Paris, New York, Carrara, Aix-en-Provence and Lima before moving to Mexico City where he has lived and worked since 1996. His art has been exhibited throughout Asia, Europe, North America and South America. Awards and recognition include the Sculpture Prize at the Nice Biennial; residencies with the Jim Thompson Foundation in Thailand, as well as the Religare Arts Initiative in India; and commissions for monumental sculptures at the World Expo in Daejeon, South Korea and the Rufino Tamayo Museum in Mexico.