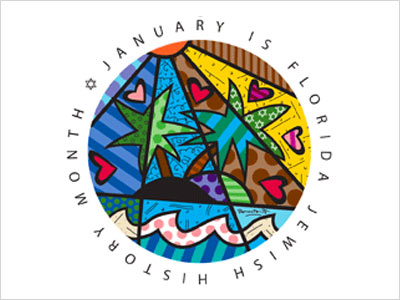 “Justice, justice shalt thou pursue” is a strand that ties together all Jews in the law. To honor the service of all those Floridian Jews who have devoted their professional lives to the public to sustain the rule of law, the kick-off for Florida Jewish History Month will feature “Florida Jews in Justice.” This free program will be held Sunday, January 9, 2011 at 10:30 am at the Museum.
Former Chief Justice of the Florida Supreme Court, Gerald Kogan, will moderate a panel discussion that includes former Chief Justice of the Florida Supreme Court, Arthur England; (Ret) Assistant Director Miami-Dade Police Dept. and a founder of the Shomrim Society, Irving “Red” Heller; Dept. of Justice, Southern District of Florida, Assistant U.S. Attorney, Karen Gilbert; and U.S. Bankruptcy Judge A. Jay Cristol.

The people of the book were drawn to the legal profession as soon as occupational restrictions were lifted in the countries in which they lived. In the U.S., law became a bulwark against the kinds of oppression Jews had endured in many lands for countless generations. The rule of law has allowed Jews and all minorities to help shape our national and state history. Law remains an avenue of social mobility in our society and the best of our Jewish lawyers and judges have worked to secure justice for others.

Eight Jews have served on the Supreme Court of the US. Louis Brandeis (1916) was the first – although Judah P. Benjamin rejected the offer in 1853 when he chose to retain his Senate seat. Benjamin Cardozo, Felix Frankfurter, Arthur J. Goldberg, who once said that his concern for justice stems from his heritage, and Abe Fortas served in the past. In 1993 as the 107th Justice, Ruth Bader Ginsburg said, “I am proud of being a Jew. The demand for justice runs through the entirety of the Jewish tradition.” In 1994, Stephen G. Breyer joined the Court. And this year, Elena Kagan became the third Jew to serve currently on the U.S. Supreme Court.

Perhaps you know that at least 270 Jews have served as judges in Florida. Our Museum keeps scrapbooks about Floridian Jews who have served in public office. One set is for Judges. The earliest known Jewish judge in Florida was Gus Cohen in Pensacola from 1884-1914, who was a federal judge. Cohen settled there before the Civil War and was the grandfather of Frances Cohen who married Mitchell Wolfson in Miami in 1926. The earliest known Circuit Court Judge was Harry Sandler in Tampa 1935-1964. While in the Legislature (1932-35), he sponsored the Homestead Exemption Amendment. AO Kanner served as 1st chief judge of the 2nd Court of Appeal in 1957. There is a highway named for him in Martin County.

WHAT IS FLORIDA JEWISH HISTORY MONTH?

The concept for Florida Jewish History Month (FJHM) began at the Jewish Museum of Florida. Marcia Jo Zerivitz, the Museum’s Founding Executive Director and Chief Curator, worked closely with legislators to translate the Museum’s mission into a statewide observance. It seemed appropriate to honor Jewish contributions to the state, as about 16 percent of the American Jewish community lives in Florida. But while Florida hosts the nation’s third largest Jewish community, it is perceived to have a “new” Florida Jewish history starting after World War II.

Although Florida was discovered in 1513, Jews and any people other than Catholics have been allowed to live in the state only since 1763 when Florida was taken from the Spanish and turned over to the British in the Treaty of Paris following the French and Indian War. The first Jews settled in Pensacola in 1763 and bought property to begin businesses. David Levy Yulee, a Jew, brought Florida into statehood in 1845, served as its first U.S. senator and was the first person of Jewish ancestry to serve in the U.S. Congress.

“Florida’s greatest asset is its people,” Zerivitz said. “Among the myriad of ethnic groups that have passed through our State since 1513, Jews are notable for remaining here and retaining their identity. Like other groups, Jews have actively participated in shaping the destiny of Florida. January of each year is a time to reflect on the significant contributions Floridian Jews have made,” says Zerivitz.

The first seven years of commemoration were so successful that the Museum continues to distribute curricula and materials for the schools and programs for adult groups. These materials for schools were approved by the Miami-Dade County Public School Board and distributed to all counties by the State of Florida. Miami-Dade School Board member since 2004, Dr. Martin Karp, will present a resolution and action plan sponsored by the School Board to engage students in FJHM activities. Jews have served on school boards throughout the state for more than 100 years. Moses Levy of Micanopy, father of Florida’s first U.S. Senator David Levy Yulee (1845), was an early advocate of public education in Florida, served as vice-president of the Florida Education Society in 1831, and was instrumental in establishing Florida’s first free public school in St. Augustine in 1832.

Educational materials for FJHM and a speech that can be delivered by anyone for an organization, congregation, school or civic group can be found on the Museum’s web site, www.jewishmuseum.com.

Artist Romero Britto, a native of Brazil who lives in Miami, created the official multi-color logo for FJHM. Congregations, schools, municipalities and the media all feature heavily in the month-long programming. Organizations interested in having a guest speaker for Florida Jewish History Month should contact the Museum at 305-672-5044 ext. 3180.

The success of Florida Jewish History Month inspired the legislation for Jewish American Heritage Month, also initiated by the Museum, and observed in May with a Proclamation signed by President George Bush in April 2006.