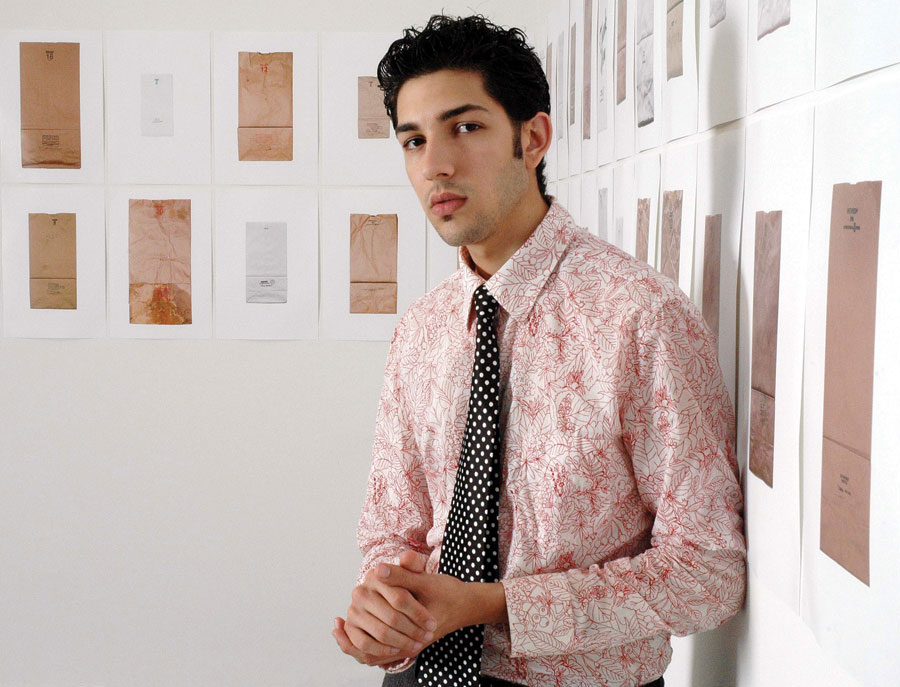 We all heard about the “emerging” applied to young, talented artists, meaning coming out to be noticed, or perhaps being on the rocky path to success. However, we rarely see this term applied to an art gallery director or a curator like they were naturally labeled “established”. But emerging anyways, Miami art scene sees many new initiatives run by fresh professionals.

Just take a look at Red Dot Project, a newly created curatorial project house under the direction of Anthony Spinello, 22. I met him last year at the time he was appointed director of Liquid Blue Gallery in Wynwood. Naturally focused and challenge taking, Mr. Spinello have seen his potential grow. In less than a year he took LBG to the next level with notable success.

But far from success, Spinello recognizes himself in a process where commitment to his work and the work of the artists he rep- resents are the key factors for recognition. I have witnessed how his curatorial criteria developed with every new exhibition by showing art productions like John Zoller, or the ironically and playful collaborative Guerra de la Paz , and more important, we have seen this young man stepping out of Miami toward national art fairs and making a good job out of it.

Despite his youth, Spinello seems to know that experience don’t come with time alone but it is there to be earned. He shows a dedication to the work rarely seen at such an early stage of a career. It’s no surprise for me to know now about Red Dot Project. I visited him just to see how he was doing. Again, his determination and plane honesty didn’t leave space for doubts about the future of his new venture.

Cynthia Saez: Can you tell me a little bit about your time at the Liquid Blue Gallery as a gallery director?

Anthony Spinello: Fortunately, the owners, Jeff Morr and Julian Chang believed in me and trust- ed me to place Liquid Blue Gallery on the map. I am extremely appreciative that they gave me the opportunity; I couldn’t see myself immersed in any other profession. With the guidance of many influential pillars in the arts in Miami, such as Bernice Steinbaum, Nick Cindric, Claire Breukel, and Mark Cotzee, the results thus far have been extremely positive and rewarding.

CS: You are not only a young gallery director but also an artist-curator. How do you manage these three different approaches?

AS: I don’t believe I have to manage three approaches. I feel that my approach in all my artistic ventures is to consistently produce “quality.”

CS: Which are the criteria when selecting artists for your roster?

AS: I primarily focus on contemporary / urban con- temporary emerging and mid-career artists. It’s important for me to be emotionally and intellectually stimulated and connected to the artwork. I examine everything: craftsmanship, dialog, composition, technique, color, relevance, commitment, professionalism, and most importantly – the ability to collaborate and trust.

AS: Yes. When I moved to Wynwood, I was happy to see the artistic energy and a sense of community thriving to produce an impressive art scene. It is reminiscent to the explosive art scene, in Williams- burg, Brooklyn. “It’s wynderful.”

AS: It was absolutely incredible. Art Chicago in the Park being my first art fair was a blast. It was an extremely ambitious and perhaps a crazy endeavor, showcasing 12 artists: Guerra de la Paz, John Zoller, Jordan Eagles, Carl Michael Pascuzzi, Jason Gallacher, Juan Doe, Arlene Berrie, Agustina Woodgate, Books IIII, Srta. Cristina, Josefina Posch, and Sara Stites. All of which made the experience a success. We even received local press in the Chicago Tribune. Scope Hamptons was just as fun and proved to be just as successful. The feature artists, Guerra de la Paz were clearly the high- light of the event.

CS: Would you like to tell me about your new venture Red Dot Project?

Red Dot Project just seemed to be the next step for me. Right now, Red Dot Project is a nomadic curatorial project house. We exhibit, promote, and support art that is innovative and ground breaking. It will be growing and evolving within the next few months.

CS: What shows do you have lined up for this coming season?