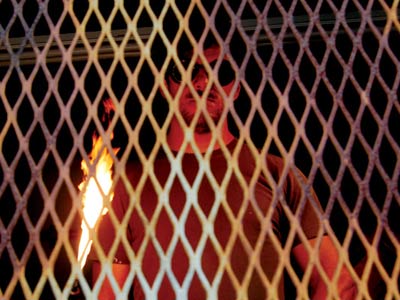 Potential energy is more or less defined as “the mechanical energy that a body has by virtue of its position; rather than it’s motion”. The idea of stored energy seems to refer to Miami local Robert Lorie in several different ways – it not only embodies the work he has been creating over the past few years, but also highlights the spring-loaded position he as an artist sits in; compelling and pregnant with possibility that depends on the activation of viewers.

It’s difficult to track down preserved images of Lorie’s (better known as Meatball to Miami folks) pieces; this is largely due to the nature of the work he creates. Just to look at these rusty, metal, welded sculptures wouldn’t be enough to get the message. They require participation and performance, and charge the atmosphere in a way you truly experience via attendance. These are key elements.
The concept of his work has to do with human power; and if you’ve met the guy, you can see where the inclination comes from – they call him Meatball for a reason. “[It’s about] showing what we can do with our own body,” he says, “it’s an extension of the body.” But it’s not just about brute force with the objects and raw machines he creates. The more subtle conceptual backdrop, coupled with the experience of the work, is what sets it apart – both from other kinetic work, and from trends and tendencies in Miami art.

Meatball’s latest endeavor, a collaboration with Till Koerber, was the most engaging and interesting single piece in that month’s Wynwood / Design District gallery walk. February’s HATE Show, curated by Miami artist Justin Long and hosted in a vacant space in the Design District, lovingly took place on Valentine’s day, and to a certain extent, poked fun at the illusive concept of what art is. This is where Meatball and Koerber’s piece was exhibited – a large, noisy, bouncy, metal monstrosity that shook violently – propelled by a diesel engine welded to it’s core. Constructed of two metal rectangles with fairly enormous automotive springs at each corner, it rather resembled a vibrating bed. It was a challenge for patrons when jump-started into motion – and in some ways (one being the profuse diesel exhaust it emitted indoors), it appeared to carry an anti-art message of sorts. But when it was gyrating, lurching, and causing a spectacle, people couldn’t take their eyes off it. It completely changed and controlled the environment. In this way it cannot avoid being included in an artistic dialogue. This was the irony of the show as a whole; despite it’s whimsical jab at the art world, it was of the better exhibitions in the exalted Wynwood / Design District area.

But it’s not just an extension of his body, nor is it just about jarring the audience. “All art is an extension of humanity,” Meatball says, “the physical side of humanity.” The mining of steel, the use of materials, and all the tools required to do these insane tasks, he says, highlight how efficiently we use energy. With Motor, literally a lawn mower motor welded to four steel legs roughly four feet high, he imbued the piece with one sole purpose: just to spin itself. Like people, he says, it is static in a location, and focused only on sustaining itself for its own purpose. “It’s like the organism that is our lives,” he says, “it’s just [about] feeding it gas so it can spin itself.” It eventually becomes the only reason it exists – something he likens to going to school, getting a job, getting a house nearby that job, and continuing on and on in this manner out of some sort of perceived necessity.

Insane tasks, ones that require more energy than they produce, are cardinal to Meatball’s work. He often is the only person that can operate the things he creates. “At first it’s a struggle,” he says in reference to Bicycle – a welded, all-steel bike with a six foot front tire. “I built this thing, and wasn’t able to ride it at first.” It defies intuition; not only was he trapped in by a steel brace around his head, but he also had to pedal backward to make the apparatus move forward. A simple turn took much forethought and advance planning. “It was a play between me and the bike; going back and forth, learning to ride it, and it being ridden by me,” he says, “It’s a play between the both of us.” It’s a waste of energy, and is a play on efficiency. Another prime example, Old Vic, is an old Crown Victoria car, stripped of it’s engine and powered by it’s two creators – hunched under the hood furiously turning cranks, only to get the car up to a slow crawl. “These things I build are not meant for casual or practical use. They are meant for a learning experience.”

Hammer and, what he refers to as “no title” or “no name”, put this notion more bluntly. Hammer, a seventy-five pound all steel sledgehammer, appears to be an utter wrecking ball. But counter to this assumption, Meatball says, it’s too big to get a job done. This piece especially requires being there. “When it’s raised over my head, that’s when it has the most potential.” He says, and that’s when onlookers realize “this thing could kill someone.” With the crank piece, the participant has to provide energy, only to get a startling WHAPP! at the end of turning the wheel. “It’s like a combustion engine in reverse,” he says, “you have to put all this energy in, and you get nothing, go nowhere. Just a loud noise.” It’s a lot like life.

And it indicates another thing about experiencing Meatball’s art. It demands your full attention; it’s engaging, and strangely mesmerizing. And all for what? You invest the energy into this experience only to realize that you got completely enthralled in a pointless task. The commentary this makes speaks volumes. The lack of documentation on these works in not particularly an accident. They are an event. Seeing it on video, he believes, doesn’t do anything. When you are there to witness the works in action, “[you get] so caught up in what’s happening, you lose track of everything else,” he says, “you can’t look away.” The tension and reactions from viewers are difficult to re-create in a video, let alone a photograph, which really can only represent half the piece. Meatball himself, interacting with the works is really quite a production.

But like his commentary on becoming stationary, he doesn’t want to have a shtick – to settle into a concept and become inert. He anticipates the evolution of his work – “That’s what makes art interesting,” he says, “It’s a conversation. You’re not going to say the same thing ten times over and over to someone or they’re gonna fall asleep on you.” And although many of his projects can be arduous to construct, especially if they don’t turn out as planned, just doing it is a vital part to the whole. “Sometimes,” he says, “you just gotta waste your time.”