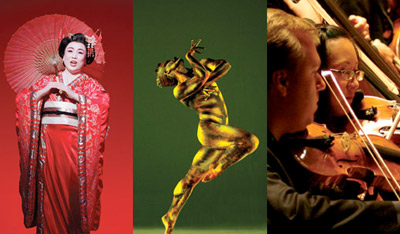 Almost the only rich thing about cultural enrichment these days is the struggle these organizations face. If big business, local, state and federal governments are facing a grim economic scene, then cultural non-profits across the country will be destroyed by reduced funding and declining participation in the arts. However, some will survive, only to find even tougher conditions to operate in. And that’s the good news.

Some organizations won’t survive. And it appears Cultural Fridays might be one of them. The organization depends on a $75,000 community development grant from the City of Miami to organize and produce 12 arts festivals that attract close to 70,000 visitors a year to the art galleries, restaurants and shops in Little Havana. “All of the area businesses bank on that event,” said Ralph Duharte, executive director of Cultural Fridays (Viernes Culturales). “When people turn out that night, the galleries, restaurants and shops can make enough to cover rent.” Faced with layoffs and reducing essential services in its efforts to make up as much as a $118 million budget deficit, it’s likely no local non-profit was spared seeing a cut in funding from the city. But in addition to losing city funding, Duharte also saw a loss in corporate sponsorship, including that of Ford Motor Credit. All of which could spell doom for the last-Friday-of-the-month event that’s been running for the past 10 years or so.

“I’m not crying about it. I’m just stating it how it is. The reality is people can live without culture, but can’t live without food and jobs,” Duharte said. “If something doesn’t change, it’s gonna kill the whole neighborhood.” And Duharte might not be too far off the mark. According to the National Endowment for the Arts 2008 survey of arts participation, fewer people participate in the arts and that participation has been on a decline since the early 1980s, which describes a country where more people are indeed living without culture. But despite the gloomy conditions, a handful of arts organizations in Miami-Dade continue to stay the course, which projections a few years ago that foretold of a course that would have included growth in revenue and audience, instead of actual declines in both. Before the recent economic nose dive, 2002 labor statistics for Florida projected a slight increase in employment in South Florida’s non-profit workforce. While it’s too early to tell if indeed that will be the case, though it doesn’t look good, recent rebounds in unemployment estimates have put economists and business journalists into a flutter about signs of recovery.

But for the area non-profit executives contacted for this story, signs of recovery look like, a January 2010 Cultural Fridays event for Duharte, increased museum membership at Frost Museum FIU, a return of the broad range of support that’s kept GableStage open for 20 years and a good dose of moderation, said Dana Keith, founder and director at Miami Beach Cinematheque. “People generally know that art and culture is an important part of the quality of life,” Keith said. “I think many people have learned a lesson in spending over their means and have come back down to earth.” While some businesses and non-profit organizations will amend their indulgent ways to navigate the current economic crunch, Joe Adler, producing artistic director at GableStage said that following basic business principles, keeping expenses low, diversifying revenue sources and in times like these, even presenting shows with smaller casts, has been crucial for his theater’s survival.

“Fiscal responsibility is essential in the arts, as it is in the for-profit world,” Adler said. “We have always maintained a strict policy of fiscal responsibility and stayed within our budget. Therefore not having a debt load to deal with makes this downturn in the economy somewhat easier to handle.”

“Even non-profit organizations have to be run like a for-profit business. Arts and cultural organizations, both large and small, have to have a business overlay,” said Arlys Raymond, executive director of Bakehouse Art Complex. “If your organization is seeking grants or other funding, grantors and donors want to feel secure that their money is being spent wisely, and that’s expected. I suspect that organizations that do not have diversified sources of income are having a tough time.”

While the diversity of the art complex includes artists from 15 countries, it also includes a variety of ways it reaches artists and art enthusiast by operating studio and exhibition space to about 70 artists and producing children and adult educational arts programs and exhibitions. And all with staff of 2 full-time and 2 part-time employees. “It has to be a team effort from administration, board members, employees and volunteers,” Raymond said. “For any business, it takes many long hours and long days to succeed, so it helps tremendously to have passion for what you do.”

While National Endowment for the Arts report shows a decline in arts participation, GableStage along with Florida Grand Opera have seen steady box-office sales and subscription renewals, at least at those two organizations participation hasn’t seen a decline. “Fortunately for us, the box office has not been severely affected,” Adler said. “But we do look forward to the time when support from corporations, foundations and individual donors returns to pre-recession levels.”

Florida Grand Opera faces a cut in government funding, 2009-10 season ticket subscriptions have maintained. “We had deep concerns about subscription during our subscription renewal campaign”, said Justin Moss, public relations and community affairs director for Florida Grand Opera. “We feared that we, like many other organizations, would see a major loss in our subscription base. So we were tremendously relieved that we were able to renew just over 80 percent of our subscribers. We’re interpreting it as a signal that confidence is growing.” And for good reason, opera companies across the country have been closing down.

“We have already seen four long- established opera companies go out of business over the past several months, Opera Pacific in Orange County California, Orlando Opera, Baltimore Opera and Connecticut Opera,” Moss said. “I think not-for-profit organizations are all going to get lean, downsizing both the organization and programming. I think the biggest change, though, will be in the number of organizations nationwide being substantially fewer than it was three or four years ago.” Some might argue that fewer non-profit organizations might not be such a bad thing, it thins the heard.

So if the herd, which in Miami-Dade includes about 1,000 non-profit organizations, is indeed thinned by the current economic slump, collaboration would become even more important. “Maintaining the arts community through difficult financial times or any time in general depends on an arts organization understanding the importance of partnerships and collaborations,” said Carol Damian, director of the Frost Museum FIU and head of the university’s art department.

“It’s now about collaboration and creativity, much of which starts from within,” Damian said. “Our goal is to be a community museum, and our community is our university and the surrounding neighborhood first. We also welcome anyone who is interested in an educational art experience in one of the most beautiful buildings in South Florida – itself a work of art – on a huge campus that belongs to the public.”

During drastic times, people expect drastic measures. But what area non-profits seem to be doing is sticking to basic business principles, not so much to grow the bottom line, but enrich the community through the arts.