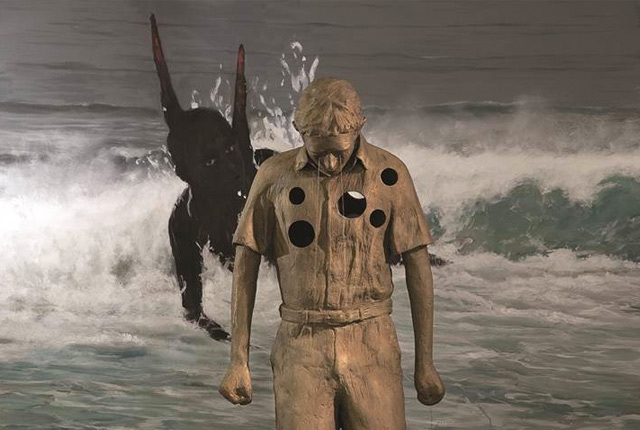 The mirror has been a frequently recurring signifier in Martínez Celaya’s work, functioning as a proxy subject, a site of uncanny reflexivity, and an object of philosophical inquiry. In Burning as it were a lamp, the mirror is again at the center of a dense web of visual, literary and philosophical relationships which investigate issues of identity, memory, and loss through the space of multi-disciplinary installation. The exhibition is a continuation of themes and concepts explored in a recent museum-wide environment at SITE Santa Fe, The Pearl.

The exhibition takes as its starting point one sculpture of a bronze boy with circular holes cut from his metal shell. Three of the room wall’s are tiled in mirrors so although only the back of the boy can be seen initially, the reflection reveals that he is crying into a pool of his own tears. The mirrors also introduce a mid-format vertical painting of a burnt angel crashing into the sea, which hangs on the fourth wall behind the crying boy.

As the viewer moves through the installation, the relationship between subject and object is destabilized by the interplay of painted surface, reflected imagery, and sculptural object. Doubled in the mirror and gazed upon by real and depicted subjects, the works are sources of both spatial ambiguity and self-identification. Through the activation and reordering of the various affective, symbolic, and structural registers of the installation, Martínez Celaya seeks to both dislocate and affirm the viewer’s relation to the work and, consequently, their own identity.

Enrique Martínez Celaya, trained as artist and physicist, works in painting, sculpture, photography, and writing. His work has been widely exhibited internationally and is included in the permanent collections of the Metropolitan Museum of Art, The State Hermitage Museum, the Whitney Museum of American Art, the Museum of Contemporary Art in Los Angeles, the Moderna Museet in Stockholm, Sweden, and the Museum der bildenden Künste in Leipzig, Germany, among others. Martínez Celaya is a Montgomery Fellow at Dartmouth College, was honored as the second Presidential Professor in the history of the University of Nebraska, taught as a tenured professor in the faculty of Pomona College and Claremont Graduate University. He has received the National Artist Award from the Anderson Ranch Arts Center, the California Community Foundation Fellowship, J. Paul Getty Trust Fund for Visual Arts, and the Young Talent Award from the Los Angeles County Museum of Art. In 2013, Ediciones Polígrafa (Spain) published Enrique Martínez Celaya: Working methods/Métodos de trabajo a comprehensive study of Martínez Celaya’s work process.