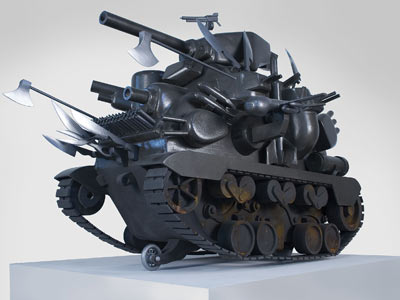 “Humor, which is the function of wit in any medium, linguistics as well as visual, is the triumph of context, not content, form not image, manner, not message,” says critic Ricardo Pau-Llosa in his essay “Esteban Blanco’s ‘Playing with Dolls.’” Esteban Blanco is the kind of artist who uses his acquired knowledge very wisely for his work.

Blanco migrated from Cuba to the United States in the 1960s. Living in New York for a while allowed him to study art at the Brooklyn Museum School of Visual Arts. Like many other artists, Blanco had regular jobs to make his living and also worked on his art. He was a commercial photographer, graphic designer and copywriter. In the practice of these careers, Blanco produced a great number of pieces that talked about the excesses and waste of the consumer society.

War toys and Barbie dolls have been the artist’s favorite inspiration. Airplanes, boats and other artifacts made of mixed media are thought to be toys for adults. Isn’t the war a dangerous game we grown ups like to play? It’s really noticeable the high level of details with which the hazardous toys are created. Esteban Blanco sets up a perfect playground for a potential war as any belligerent politician (governor or president of a country) would do. The artist exposes the cruelty of the modern culture by using sharp black-humored stories. There is a tragic depiction of the decay of the humanity and the social order. Long knives and axes draw up to snatch our heads like the legendary monster Scylla did to six of Odysseus’s men.

The Barbie dolls, however, seem happy characters of S&M porn. They appear within a variety of forbidding scenarios, playing different roles such as the voluptuous teenager, the little mermaid, the regretful prayer, the agonizing slave, and the barbecue meat. The Barbie dolls experience a gradual transformation that goes from being innocent playthings to become sexually-explicit objects. It seems that feminist propaganda hasn’t at all changed men’s vision of women. Do women need to go through these experiences to gain more understanding about the responsibilities they have in society? The work with the Barbie dolls recalls the use of marionettes in the movie Team America: World Police by Trey Parker and Matt Stone, creators of the contentious South Park series.

Defiant and stimulating, Esteban Blanco’s art challenges the viewer’s perspective on issues that have been long-time silenced. His references go far beyond visual arts to penetrate into literature and world history. War toys and Barbie dolls discourse about local issues, but they also allude to more significant events that have helped shape the world such as the French Revolution, WW-II, and why not, the 2003 US Invasion of Iraq.