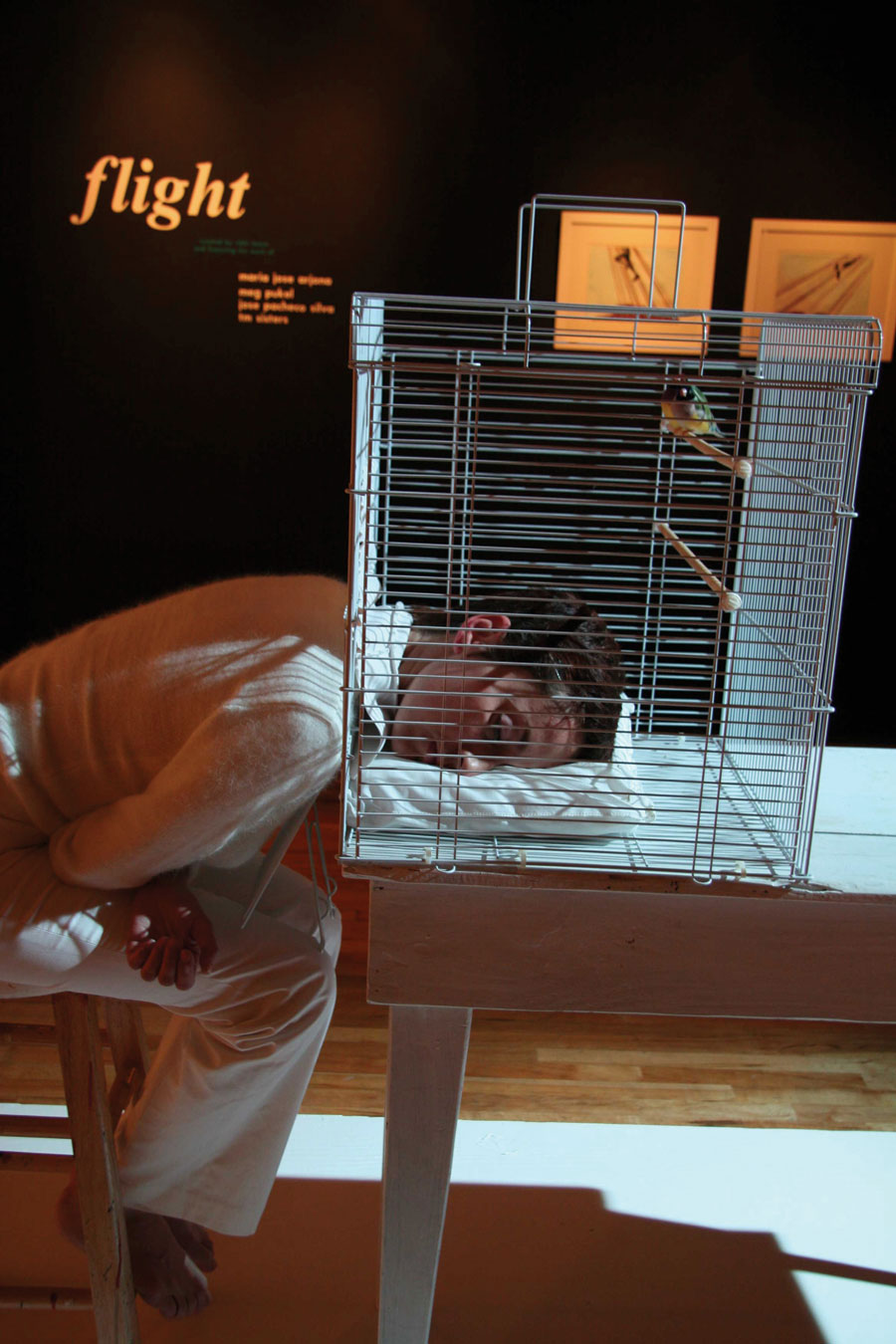 Flying has been an obsession of human beings for centuries. From Da Vinci’s drawings to the Right brothers the iconography that supports this idea is impossible to catalogue. There are innumerable examples of artists who had worked with this theme. Symbols have varied according to the epoch, however, birds and wings are perhaps the most common in this repertoire. From religious to pagan representations, from personal to more general topics flying has become, per excellence, the metaphor of freedom. All the anguish contained in the existentialism that plagued the 20th century, and that seems to be spreading to the 21st to some extent, has been somehow represented in art balanced with images of flying in a way or another, the ideal way of escaping. It seems that the thought of elevating gives an immediate sense of calm and relief, if not a physical escape at least an emotional. Perhaps it is supporting Frazer’s theory that the image has the same powerful effect than reality, therefore creating the image would complete the magical process.

There are so many exhibitions devoted to the subject that to mention all of them is pointless. However, there is one, recently presented at the Miami Light Project that deserves special attention.

The title of the exhibition was flight and was curated by Nikki Beem. A small exhibition, reinforced for the intimacy of the space all painted in black, showed the work of four artists based in Miami. They are Meg Pukel, Jose Pacheco Silva, Maria José Arjona and the TM Sisters. The works spectrum covered different medias, from photography and collages to performance and videos.

One of the central works in the exhibition was a performance by Maria José Arjona. She was seated at a table and her head was inside a cage with small birds. The cage was placed at one extreme of the table and at the other side the artist left a copy of the book The Lord of Flight. The table was placed on a white platform, somehow marking the space and creating a sense of stage reinforced by the light. For hours the artist stayed in the same position, with her head inside the cage like she had no other option but to seat still. Maria was trying to sense the lack of freedom that caged birds experiment, the confinement in a grilled cage, able to see the outside, so close and yet so far from freedom.

Isolation can be one of the sensations that could lead to the desire of flying. This idea was reflected in José Pacheco Silva’s work. His work was represented by two pieces. The first was a metal sculpture were alienated figures balanced in their solitude, at the border like walking on the tightrope, ready to flight to attain freedom from its own confinement.

Silva’s second piece consisted in multiple mutilated birds trapped in wire and cement, a physical impediment to the flight. Again, he is using one of the oldest symbols of freedom in his work, or in this case, the absent of it becomes the central idea. The trapped birds are an effective image to transmit the sensation of lack of control in a determine situation. Birds are by nature fragile creatures; it’s use as the central symbol of the piece implies the position of the artist facing a determined situation, his position of being totally helpless.

Meg Pukel uses the feminine body as the central element of her work. Pukel is bringing to our attention how the female body is most of the time considered from a sexual point of view. She is using this connotation and reverts the process where the bodies are establishing a dialogue with their ‘staged’ environment. Staged because she ‘constructed’ her images through careful montages. The juxtaposition of the naked bodies to urban landscapes, their transformations into something that is not defined neither attained and the anguish in the process gives the spectator the anxiety that the artist is experimenting.

The TM Sisters is a creative duo that happens to be sisters. Their work included collages and a video. Their collages were playing with the idea of childhood and again the central idea of the exhibition, flying. Their short film titled Aiming for his target was continually projected on a wall. While on their collages the idea of flying is not completed because somehow the images continued connected to earth, on their film the fly indeed takes place.

All the artists in the exhibition somehow played with the idea of flying as a way of liberating themselves from their own tides. So even when flying has become a real possibility human beings are still dreaming about flying, cutting loose.