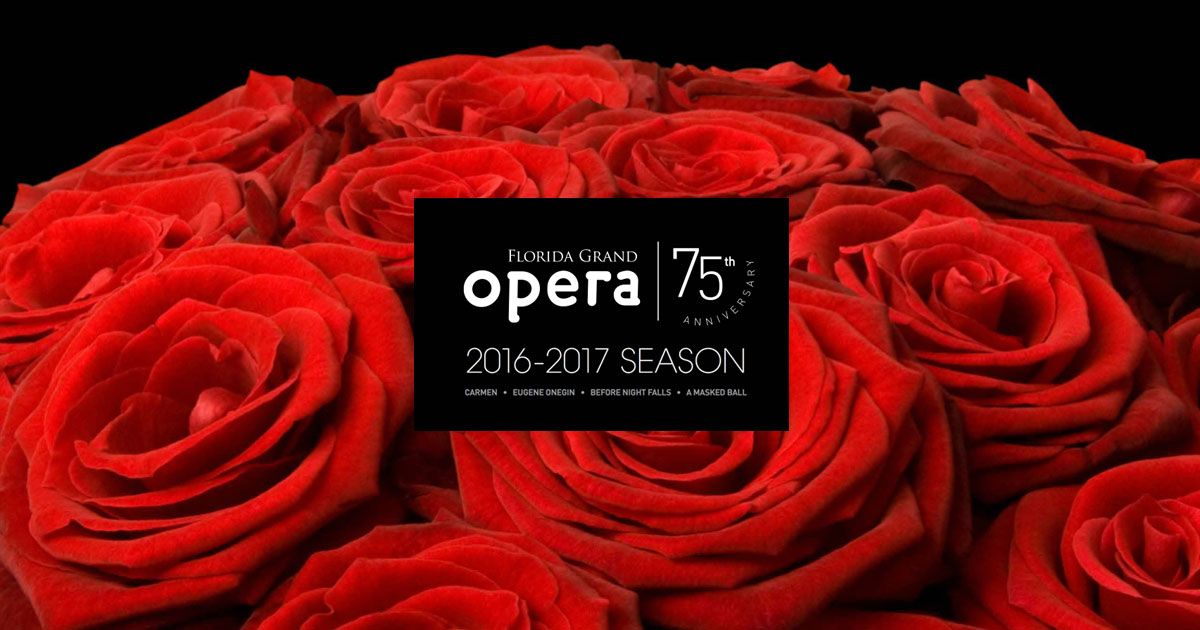 In celebration of our 75th continuous year of bringing the finest opera to South Florida we have designed a season with something for everyone. Each of the operas will resonate with one our various communities. Before Night Falls, based on the autobiography of Cuban poet Reinaldo Arenas, will be the fourth installment in our Made for Miami series. Composer Jorge Martín is Cuban-born and has strong ties to South Florida. We look forward to introducing him to all of you.

The season will feature the traditional period productions and begin with an audience favorite, Carmen. We are pleased to present Tchaikovsky’s Eugene Onegin, a tale of universal human truths. After a 17 year absence it returns to our stage at long last. Culminating the 2016-17 season will be Stephen Sondheim’s Sweeney Todd which is designed to welcome the Broadway audience to see this production no one should miss.

Carmen by Georges Bizet
Nov 12 through Dec 3, 2016
No opera is more requested. No opera is so anticipated. And no opera is more beloved than Carmen! Carmen, the fiery gypsy cigarette girl, gets any man she wants—and then gets rid of him when a better one comes along. When she sets her sights on Corporal Don José, he doesn’t stand a chance. He’s smitten and gives up everything—his career, his mother, even the girl he’s going to marry—to be with the sultry siren. For a while, they revel in passion. But then Carmen meets a famous matador and dumps Don José in a heartbeat. This time, though, she has finally pushed a man too far! Join us for this traditional presentation filled with characters you’ll love and music you’ll never forget.
Sung in French with projected titles in English and Spanish

Eugene Onegin by Pyotr Ilyich Tchaikovsky
Jan 28 through Feb 11, 2017
Arguably Tchaikovsky’s most beloved and most famous opera, this feverishly passionate story unfolds through the beautiful, melodic music and lush orchestration that characterize Tchaikovsky’s work. When the narcissistic young Onegin spurns the affections of a sensitive young girl and turns a pistol on his best friend in a fatal duel, he is left only with regret. Years later, reunited with his now-married former admirer, can he rekindle his chance at true love?
Sung in Russian with projected titles in English and Spanish

Based on the famous memoir of Cuban poet Reinaldo Arenas, Before Night Falls follows Arenas’ life from childhood poverty in the Cuban countryside to his emigration to the United States in the 1980 Mariel boatlift, and his last decade in New York City. Disillusioned by the Cuban Revolution and persecuted by the Castro regime as a dissident writer and homosexual, the opera follows his trials and tribulations as a political prisoner forced to smuggle his manuscripts abroad for publication. In 2000, Before Night Falls was made into an award-winning feature film directed by Julian Schnabel and starring Javier Bardem and Johnny Depp.
Sung in English & Spanish with projected titles in both languages

A Masked Ball by Giuseppe Verdi
Apr 29 through May 13, 2017
Riccardo, the young and popular king, is planning a masked ball. His secretary and close friend Renato has become aware of conspirators who want Riccardo dead. Unbeknownst to Renato, the king is in love with Renato’s wife, Amelia. When the king eavesdrops on Amelia and hears her confess that she loves him, a chain of events is unleashed that leads unavoidably toward tragedy.
Sung in Italian with projected titles in English and Spanish