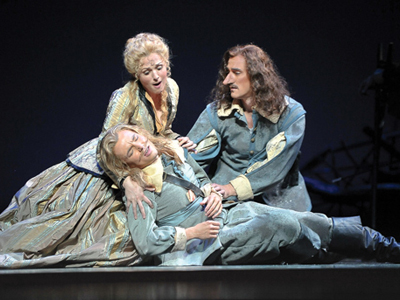 Although we have had to come to terms with the fact that tight skirts, platforms, and affliction t-shirts rule a large part of our local night scene, walking down Biscayne Boulevard on opera night is just the thing to reminds us of our strong, pioneering, and always inspiring art scene. Recently, as the Florida Grand Opera presented Cyrano, it was women in elegant gowns and men in their best suits that lead the way to the night’s main event at the remarkable Sanford and Dolores Ziff Ballet Opera House at the Adrienne Arsht Center for the Performing Arts. Cyrano, based on Edmond Rostand’s renowned Cyrano de Bergerac, was composed by David DiChiera and only first performed in 2007 in Detroit and Philadelphia. A modern opera, Cyrano tells the story of the bravest and wittiest of swordsmen that has but one giant flaw – his nose! A humoristic plot, a vulnerable and poetic hero, and a goose bump-worthy orchestra conducted by Mark Flint, make this production especially inviting to the opera newbie, easing his or her way into the art with an easy to follow storyline and three world-class vocal stars: Marian Pop as Cyrano, Leah Partridge as the beautiful Roxanne, and Sébastien Guèze as Cyrano’s gold locked puppet, Christian.

The opera house curtain rises over 17th century Paris as a crowd anxiously awaits the arrival and performance of Montfleury, the most popular thespian in town. Christian, the handsome new cadet in Paris arrives at the scene with the town drunk who helps him identify the woman he loves as Roxanne, Cyrano’s cousin. As we first hear about Cyrano’s unsightly nose, he is finally revealed, causing an uneasy murmur as he reminds Montfleury of his banishment from the theater. Although Montfleury is driven off the stage and comically de-wigged, our attention is quickly turned to petty jabs at Cyrano’s “birth defect”, and what begins as a simple confrontation with a nobleman is actually our first look into the mind of our poetic hero – an introduction to his incredible wit and eloquence. The action filled opening scene is followed by a conversation that reveals a softer side to our hero, as he professes his love for his cousin, Roxanne. Although he is encouraged to pursue her and let his feelings be known, Cyrano believes that even the ugliest woman would have a hard time loving a man with such a nose. The story truly begins when Cyrano finds out that Roxanne is in love with Christian, leading him to meet the good-looking fool, and make a pact to woo her together: “Let me be wit for you, be you my beauty”.

Breathtaking arias by Pop and Partridge and the incredible comedic timing of Guèze lead us through the moving story of the boldest soldier, disheartened by a physical flaw, and a love triangle that could only happen on the opera stage.

This season, Children’s Performance will feature a 60-minute abridged version of Rossini’s The Barber of Seville performed by Palm Beach Opera’s Benenson Young Artists and Apprentice Artists. Sung in Italian with English narration and supertitles projected above … +

An elegant and entertaining VIP experience!Join us for an exclusive VIP experience with a pre-performance dinner, drinks, and a unique introduction to the show by General Director Daniel Biaggi. Catered by The Breakers. Dinner begins … +

Don Giovanni is the story of the world’s greatest lover, Don Juan, a young, arrogant, and charismatic aristocrat, who will stop at nothing to fulfill his ravenous lust. But when a midnight seduction ends in … +