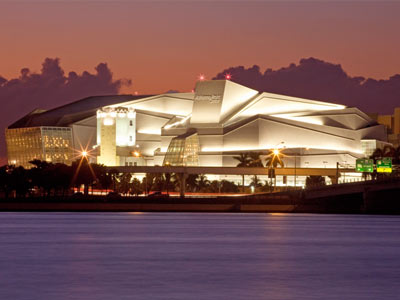 The Adrienne Arsht Center for the Performing Arts of Miami-Dade County and the John S. and James L. Knight Foundation, in partnership with Miami gospel radio station WMBM 1490 AM, proudly announce the return of Free Gospel Sundays for a superb fourth season! The 2010-2011 installment of the Free four-part concert series showcases gospel music’s top recording artists – Shirley Caesar, Vickie Winans, Kurt Carr, and Ricky Dillard and Jonathan Nelson – with the soulful sounds of the new Miami Mass Choir, the resident choir for this Free Gospel Sundays season. Each concert also features one of Miami-Dade’s best and brightest local church choirs, adding their voices to the joyful noise that fills the John S. and James L. Knight Concert Hall.

Free Gospel Sundays represents the very heart of our mission and vision coming to life – an afternoon of uplifting music that brings the entire South Florida community together to move and be moved,” M. John Richard, president and CEO of the Adrienne Arsht Center. “Since the inception of this series, more than 10,000 patrons have been part of this joyful experience, and we are honored to have Knight Foundation’s support as we continue the tradition, combining gospel’s greatest stars with Miami’s finest voices to inspire us all.”

The new Miami Mass Choir, under the direction of Pastor Marc Cooper, will make its debut at the first concert in the Free Gospel Sundays series and serve as the resident choir for the 2010-2011 season. The choir consists of 50 of Miami’s best gospel voices, selected through an open audition process, and representing South Florida from Lauderhill to Florida City.

Free Gospel Sundays is proof positive of the undeniable power of song to bring people together,” said Dennis Scholl, Knight Foundation’s vice president/arts and Miami program director. “The event, enhanced by this year’s Miami Mass Choir, is a must for all South Florida residents.”

The Adrienne Arsht Center’s extraordinarily popular Free Gospel Sundays series has been supported by the John S. and James L. Knight Foundation since the inaugural 2008-2009 season, and received a two-year, $200,000 Knight Arts Challenge grant to continue the series into the Center’s 2010-2011 season. A generous grant from the Funding Arts Network is helping the Adrienne Arsht Center to meet this challenge and make the 2010-2011 season possible.

Perhaps the most visible gospel singer in the world, Pastor Shirley Caesar has been serving up the best gospel tunes for more than 40 years. A multiple Grammy Award winner, she has sung for presidents and world leaders, and released over 30 solo albums. Her signature style, coined as “take-you-straight-to-church” music, is both timely and timeless. Pastor Caesar began her career at age 13, went on to sing with The Caravans, one of the most popular female gospel groups in history, and eventually launched a solo career which has spanned the past three decades. Her legendary career includes collaborations with the greatest vocal artists of our time, including Al Green, Whitney Houston, Patti LaBelle, and Gladys Knight; special guest appearances on television; featured roles on Broadway; and performances in seven motion pictures. Pastor Shirley Caesar is a true gospel icon, and her performance is the perfect way to kick off the 2010-2011 Free Gospel Sundays season!

The name “Winans” and gospel music are virtually synonymous, and Vickie Winans definitely lives up to her name! Winans’ music has been topping the charts for more than 25 years, and her latest CD, How I Got Over, debuted at #1 on the Billboard Gospel chart. She boasts multiple Grammy nominations, Stellar Awards, and NAACP Award-winning albums. One of the gospel industry’s most respected and beloved artists, Winans sang her first solo in church at age 8 and went on to craft an illustrious career that spans work on television, on Broadway, and in feature films. Winans’ glorious voice and vivacious, down-to-earth personality has won her legions of fans who have dubbed Winans the “Joy Princess of Gospel.”

Grammy-nominated singer, songwriter, producer, and musician Kurt Carr is one of the most celebrated gospel talents of our time. Carr is a Dove and Stellar Award-winning artist responsible for the classic gospel songs, including “The Presence of the Lord,” “In the Sanctuary, For Every Mountain,” and “God Blocked It,” just to name a few. Mentored by the gospel legend Richard Smallwood, Carr is a classically trained musician who has developed a unique signature style combining traditional gospel composition and vocals with elements of R&B, jazz, soul, blues, and distinct modern harmonies. He worked extensively with the esteemed Reverend James Cleveland as pianist and musical director, and later went on to form his own ensemble, The Kurt Carr Singers, with whom Carr has released six acclaimed gospel albums. Carr has collaborated with both gospel and secular artists such as Stevie Wonder, Yolanda Adams, and Kirk Franklin, and continues to be a driving force behind the evolution of great gospel music.

Grammy-nominated gospel sensation Ricky Dillard has been spreading the good word for over 20 years. His signature style evokes the traditional church choir sound, and has brought him international acclaim and multiple Stellar and Dove Awards. Dillard founded the New Generation Chorale in 1988, and steered the group to gospel stardom with seven award-winning albums and featured appearances in major motion pictures, including Steve Martin’s “Leap of Faith,” and Whoopi Goldberg’s “Sister Act II.” Dillard and the “New G” have appeared on PBS, and collaborated with gospel queen Albertina Walker and pop diva Patti LaBelle. Dillard’s most recent album, The 7th Episode: Live in Toronto has spent over 60 weeks on Billboard’s Top Gospel Albums. Miami-based Jonathan Nelson is one of the freshest new voices on the gospel circuit. A Stellar Award-winning singer, songwriter, Nelson has penned tunes for some of gospel’s most renown stars, and has garnered widespread acclaim for his debut album, Right Now Praise. A modern day hymn writer, Nelson’s soulful, spiritual music is gospel that crosses racial and cultural boundaries to deliver heartfelt sermons that speak to everyone.