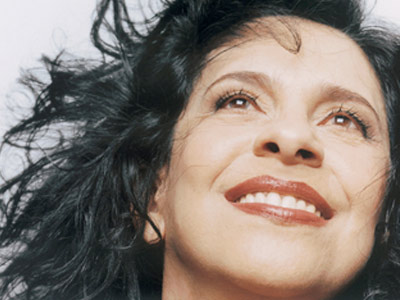 Brazilian diva Gal Costa will perform an elegantly spare concert at the Arsht Center for the Performing Arts that showcases the immense beauty of classic Brazilian songs through her lovely voice. She will be accompanied by guitarist Romero Lubambo, one of the most celebrated Brazilian jazz musicians today.

Gal Costa is one of the most celebrated singers in Brazil’s music history and a cultural icon. For several decades she has been a luminous fixture in the superstar strata of Brazilian pop. Undoubtedly, she is one of Brazil’s most important song stylists, or interpreters.  She was a founding presence in the Tropicalia movement along with Gilberto Gil, Caetano Veloso and Maria Bethania. She made her recording debut in a duo with Caetano in 1967’s Domingo.  Her eponymous solo debut, in 1969, is considered a true classic, containing songs by Veloso, Gilberto Gil, Tom Zé, and Jorge Ben.

Costa has continues to be a viable and active artist in the 21st century, issuing new recorded material even as repackaging of her previous work hits the market. Her two most recent albums, Hoje (2005) and Live at the Blue Note (2007) have been rapturously received by critics and fans alike.  2009 will see Gal back in the studio for 2 new recordings.

The 2009 North American performances will consist of a duo performing songs by Caetano Veloso, Antonio Carlos Jobim, Chico Buarque, Ary Barroso and many more: Gal Costa on vocals and Romero Lubambo on guitar. Jazziz magazine said that “Romero Lubambo may be the best practitioner of his craft in the world today… the guitarist’s facility, creativity and energy are in a class all their own.”  Influenced by both classical and jazz, he graduated from the Villa-Lobos School of Music in Rio de Janeiro, and has studied the many styles of Brazilian music. Romero has performed and/or recorded with Antonio Carlos Jobim, Dori Caymmi, Astrud Gilberto, Herbie Mann, Raphael Rabello, Paquito D’Rivera and is currently working with Diane Reeves.