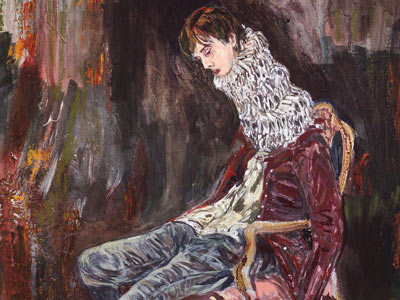 There’s been a ship wrecking. The body of a young man appears floating in the waters of the ocean. Is he still alive? His eyes are open, but his face looks pale as if he were almost entering the kingdom of death. Two men peacefully rest on the grass under the sunset. A couple of boys stare at a volcanic eruption while pushing a boat into the sea. Hernan Bas is a dreamer, a collector of stories, a prolific traveler. His works rescue the romantic and impressionist legacies in a very captivating way.

Bas became one of the most celebrated local artists, after graduating from the New World School of the Arts.His paintings convey feelings of isolation, nostalgia and other emotions found in the XVIII Century literature.“As a child I would spend hours flipping through pages filled with mummies, fallen meteors, tales of spontaneous human combustion, fish raining, and mosaics composed of human bones,” says the artist. Bas integrates everything he has learned over the years, referencing art history or literature, sources that deeply enrich the reading of his work.

This exhibition, which will be on view until the end of November 2008, includes 38 works collected by the Rubell Family during the course of a decade. Resembling the chapters of a book, the show will make us travel in time and space. The accentuated narrative structure in each piece sets the grounds for the conceptual and the suppositional. Youth, for example, is always seen as a mystery in the artist’s paintings and videos. In Fragile Moments, Bas communicates the close interaction that exists between young men as they swim together.

The sense of humanity is also an interesting feature in Bas’s body of work. In this regard, writer and curator Mark Clintberg points out the fact that the artist tells real stories about boys “with deeply held feelings.”

The Burden (I shall leave no memoirs), for instance, gently leads us into the story of a suffering boy. Bas’s work has been shown at Daniel Reich Gallery in New York, Galleria II Capricornio in Venice, and the Museum of Contemporary Art in North Miami. No doubt, Hernan Bas is an individual in hopes of finding himself through his art. By sharing his most intimate feelings, concerns, desires, the artist expands his place within the (art) world.