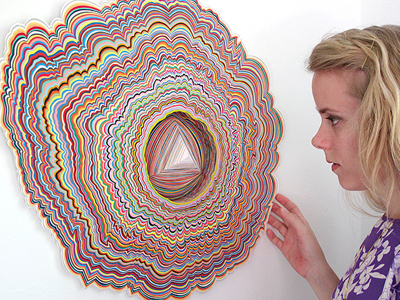 There is something unavoidably charming and analog about Jen Stark’s work. The tactile, precise-yet-handmade quality of her paper sculptures and animations is something that feels somehow influenced, in part, by her visual generation. In the arena of contemporary paper art, she is among the most notable young and prolific artists. Born in 1983 in Miami, Jen Stark creates optically engaging work that carries distinct characteristics of both her birthplace and her age, even if these facets seem mostly subconscious.

The bright and many colors – perhaps reflective, she notes, of Miami’s diverse and colorful cultures, and a stop-motion, do it yourself approach – something contemporary art seem to have regarded more a couple of decades ago than now – to her constructs, animations, and drawings communicate a certain quality in these contexts. But, when all is said and done, the work is more concerned with the visual experience and this is where their impressiveness lies more so than in any conceptual underlay. If you have seen Jen Starks’s work, and if you live in Miami it is very likely that you have (she has shown at Miami MOCA, Carol Jazzar, Fredric Snitzer, Spinello, and 20/20 Projects galleries, The Art Gallery at Government Center, and more) you know that paper and all its qualities are critical to her aesthetic accomplishments.

Something colorful, pliable, and able to have clean edges but easy to cut with exactitude is necessary to compose her layered, gradient pieces. The choice to use paper was based largely on convenience and experimentation. While studying at Maryland Institute College of Art, Stark completed a study-abroad program at the Center for Art and Culture in Aix-en-Provence, France. “I didn’t bring any art supplies, and I tried to get the cheapest material I could find to experiment with,” she says, “so I got a stack of construction paper. Now I use the best material I can find.” This alludes to another reason she found and has stuck with the medium.

“Paper is a very common material”, she says, “something that everyone uses and is exposed to in their everyday lives”. In many ways, it feels like Stark is carrying out some inclination or even fantasy that almost anyone has had when making paper projects – but of course, with the immaculate craft and visual sensibility of an artist. Although paper is common, and relatively easy to work with, her sculptures push the medium to a new level. A true sense of this comes when you consider that they are all completely hand-cut, and eyeballed, and are often of a relatively large scale. There is no-trade off for the level of topographical intensity – each cut and layer is perfectly executed. “The whole handmade thing is a part of my work,” she says regarding inquiries people have made as to why she does not utilize time-saving technology of some kind, “using a laser cutter would cause the work to lose a lot.” The process overall is similar to what, in her mind, her work is most concerned with: the collision of the mathematical and the organic form.

Much of Stark’s work, as she notes, is an exploration for her – she is inspired by shapes in nature, and due to the bold, fun, and folded design, this more science-based idea may not be readily apparent in some of the pieces. The shapes she is interested in exploring are more elusive – mathematical, geometric, and organic forms that are naturally occurring, and the underlying, eventual structure that composes any and every thing in the natural world. The notion of this microscopic view, with its underlying order, lends itself to the way her work is created and functions. Layer upon layer, the pieces create undulating forms, exemplified in motion in the animations that are both macroscopic and microscopic in and of themselves. They seem to expand and collapse simultaneously, and although these layers are hand-cut and one of a kind, they ultimately amass into a larger form that is systematic , and requires structure.  This is not unlike the molecular lattices or earth strata that comprise things far larger than any of their constituents.

Some pieces start with and follow a geometric or symmetrical shape from the beginning, and are folded or laid into complex twists and blooms that do begin to take on the anatomy of something you might encounter in a science book; this could account for why Stark has been featured not only in arts magazines, but also in craft and science publications. Other pieces start with a more formal shape and evolve into a drippy, amorphous embodiment. Putting the sculptures together is somewhat of a logistical puzzle, and this rather organic process interestingly yields a very structured result.

Although much of her work is of paper sculptures and of animations created from the same process, paper is not the only material Jen Stark works with. The artist has recently been taking a foray into cut wood – working in much the same way. For her upcoming show in May 2010 at Carol Jazzar Contemporary Art, she is making some wooden pieces with an op-art thrust. The transition to wood for these works has been smooth, she says; stacking, tracing, layering, and the dimension of time are still the main mode of construction – although the shapes have become more basic and geometric, with less complicated details. With these pieces, she wants to play with the viewer’s eye; the extra dimension of the thickness of the wood means an extra surface area between layers that can be utilized for a different effect. By painting these side surfaces different colors than the top, the color of the piece appears to change as viewers interact with and walk around it. She will also be creating a piece that recesses into the wall – kind of like a geode, she explains, that, in contrast to most of her work, will have a cavernous effect as opposed to a raised one.

Periodically changing up media – or at least formats, going from 3-dimensional to 2-dimensional – is something that helps Stark reverse her process. “The drawings are a nice little break from the sculptures,” she says, “I just sit in front of a blank piece of paper and start making marks.” This differs significantly from pre-meditated and sketched sculptures. They employ this sense of freedom in an obvious way, and are organic-meets-geometric in another way. They are brilliant, “plasmic”, and explode from all over the page – shooting bits of imagined living things and atomic particles across their compositions, strung together with sinewy lines. Although the drawings represent a different facet of her work, it is clear that they inform the sculptural pieces and vice-versa. The palette, shapes, and line work are consistent, and you can see how they progress toward one another although ultimately taking very different routes.

By using paper in all its rigid forms, and using its 2-dimensional planar nature to create rather sophisticated forms that have depth and volume, Stark maintains a solid level of consistency. Although her work can be followed in a very linear way, it is constantly becoming more and more impressive and exquisite, and it seems the healthy need for experimentation is a constant. This need is what propels the work forward, rather than allowing it to plateau, and what makes her so exciting to track. She plans to stick with paper and keep doing the drawings as well, but it is inevitable that, given the expansionary and exponential trajectory of her work, there will be many new and fresh surprises for Miami and beyond to look forward to.