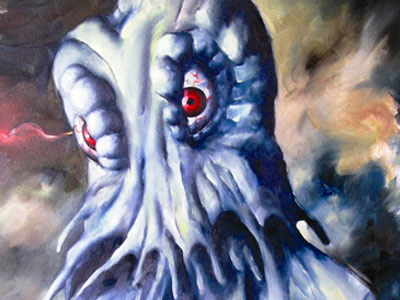 The ArtCenter/South Florida is presenting a group show titled Kaiju, curated by Harold Golen. Kaiju is a Japanese word that means "strange beast," but is often translated in English as "monster."  The most famous Kaiju is Godzilla. Other well-known Kaiju include Mothra, Anguirus, Rodan, Gamera, and King Ghidorah. During the 1960’s in Japan, toy vinyl figures of popular Japanese films such as Godzilla (a radioactive lizard) and Gamera (a giant flying turtle) became popular collectables. Over the next four decades the popularity of Kaiju spread around the world, especially here in America.

Recently the Kaiju have spread throughout the western world popular culture, their influence can be seen in the emerging popularity of the “art toy” movement, modern couture and in the artworks of many lowbrow artists from around the world. During Art Basel Miami Beach 2008, the Kaiju show at Art Center South Florida will bring the most exciting and subversive artists from Japan (East) and the United States (West) in a single exhibition to showcase the various interpretations of Kaiju in both Eastern and Western cultures. This exciting exhibition aims to break new ground in the Kaiju art form, while at the same time, honoring the Kaiju rich history.

This exhibition includes many of the top artists of the Lowbrow/Pop Surrealist movements plus internationally acclaimed Japanese artists- making this show a rare occasion that brings the best of the East and West interpretations Kaiju.