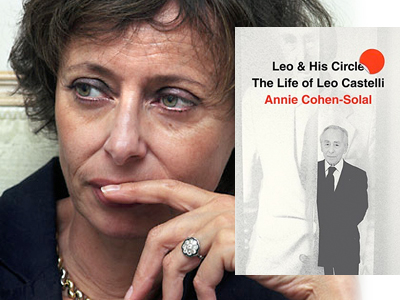 After emigrating to New York in 1941, Leo Castelli would not open a gallery for sixteen years, when he had reached the age of fifty. He transformed the way art business was done, multiplying the capital, both cultural and financial, of those artists he represented. His enterprise, which by 1980 had expanded to an impressive network of satellite galleries in Europe and three locations in New York. Leo and His Circle brilliantly narrates the course of one man’s power and influence. But Castelli had another secret, too: his life as an Italian Jew.

Annie Cohen-Solal traces a family whose fortunes rose and fell for centuries before the Castellis fled European fascism. Never hidden but also never discussed, this experience would form the core of a guarded but magnetic character possessed of unfailing old-world charm and a refusal to look backward – traits that ensured Castelli’s visionary precedence in every major new movement from Pop to Conceptual and by which he fostered the worldwide enthusiasm for American contemporary art that is his greatest legacy.

Drawing on her friendship with the subject, as well as an uncanny knack for archival excavation, Cohen-Solal gives us in full the elegant, shrewd, irresistible, and enigmatic figure at the very center of postwar American art, bringing an utterly new understanding of its evolution.

Annie Cohen-Solal was born in Algeria and received a Ph.D. in French literature from the Sorbonne. She first came to New York in 1989 as the Cultural Counselor to the French Embassy in the United States, after her acclaimed Sartre biography, Sartre: A Life, had become an international best seller, translated into sixteen languages. Her encounter with Leo Castelli prompted a shift of her interest to the art world. Cohen-Solal was awarded the Prix Bernier of the Académie des Beaux Arts for the French edition of Painting American in 2001 and won the Art Curial Prize for the best contemporary art book for the French edition of Leo Castelli and His Circle in 2010. She lives in New York, Paris and Cortona.

This event is FREE and open to the public