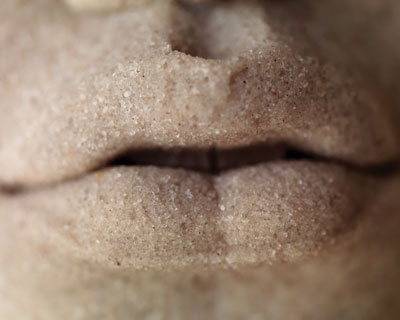 The newest and arguably one of the most ambitious art spaces to hit the Wynwood neighborhood is L-M-N-T Contemporary Art Space. Run by Gino Tozzi, it is a massive 15,000 square feet establishment aimed at not only exhibiting artwork, but also fostering the growth of those who make it. In addition to the gallery portion of the space there are artist-in-residency studios, a sound laboratory facility and an outdoor bistro overlooking the monumental sculpture gallery and media studio.

For its inaugural show, Tozzi has unveiled a solo exhibition for New York-based Cuban artist Liset Castillo, entitled Human Studies. It is the artist’s second solo show in Miami and consists of 17 large-format photographs.

These photographs each display unique sculptures of women regularly suited to the glossy pages of high fashion magazines. Castillo has molded these images completely from sand in a lengthy, painstaking process. After the pictures were taken, nature was allowed to run its course and the sculptures eroded and decayed, leaving behind the dusty building blocks from whence they came.

All of this has been done to make a statement on the ephemeral nature of beauty and the spectacle of decay, while noting the obsession with youth culture that permeates through all levels of American society. While the theme has been a popular one in the past, Castillo’s execution puts a new and notable spin on things. In addition to making viewers think, the large scale of the photographs offers a visual that draws the eye and holds a gaze, making them difficult to look away from, perhaps in the same way a beautiful fashion model is difficult to look away from for different reasons.

When you look at Castillo’s photographs, you’ll note that the sculptures have an air of alienation, noted by the addition of white space in nearly every piece. They are lost in themselves and their solitude; a situation induced by narcissism and meant to be a comment on the estrangement that stems from egotism. One of the things Castillo hopes people will take away from this exhibit is the advice to cautiously tread the corridors of vanity.

In addition to being a show heavily-laden with commentary, it is also one that displays Castillo’s refined talent for sculpture. Each of these sand sculptures clearly expresses the notable length of time that has been put into the creation of each one, and the details, especially in the countenance of each, are successfully expressive and haunting. “Her work is stunning and evocative of the fleeting nature of time or fading history,” says Tozzi. Human Studies opened on December 1, 2010, as L-M-N-T’s inaugural exhibition. It runs through March 2011 in the art complex’s main gallery space.