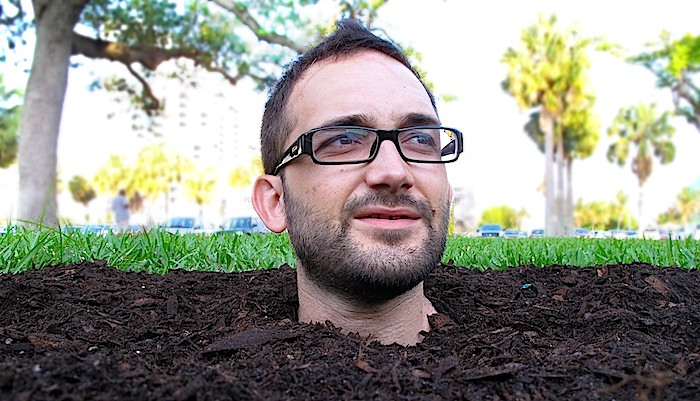 On March 9, the Miami International Film Festival premiered “Making Sh*t Up,” a documentary covering three years in the life of Miami-based conceptual artist Bert Rodriguez. The chosen venue for the debut was a cultural landmark frequented by Rodriguez in his youth, the Tower Theater. This brought two artistic icons together for an unforgettable night of film.

It was a packed house. Tickets for the show were sold out, every seat allotted for the film was occupied, and still there were people angling for a glimpse of the screen. In response, the Tower opened its second theater and had a simultaneous showing to accommodate the overflow audience. The results were overwhelmingly positive.

“The most we got were from people who didn’t know Bert’s work previously. They said that it was a real portrait of a person” says Grela Orihuela, the film’s producer and co-owner of Miami-based Wet Heat Project. “I think you get a better idea of why he does what he does. People just got conceptual art better. Watching him do it and watching that process makes it more tangible for people.”

Those who are involved with Miami’s art scene or who have an interest in local artists are likely to already know Bert’s work. He has painted his body silver and posed nude, a la Kim Kardashian, for the cover of the Miami New Times. He has buried himself, up to his neck, in the ground. He has also undertaken the daunting task of completing one original art pieces per day for 25 days. Yet these are only a few examples of the artist’s varying body of work, all of which add up to one of Miami’s most unique personas.

A highlight of Rodriguez’s career was his stint at the 2008 Whitney Biennial, where he played the role of a psychotherapist to a throng of New Yorkers, one by one, in an unassuming white cube. It was, for the most part, an unplanned exhibit. What came of it made for one of the most memorable parts of “Making Sh* Up.”

“I don’t think he was ready for it. I know we weren’t ready for it,” says Orihuela. “Something happened in that room. People broke down and talked to him, told him things that they wouldn’t tell anyone else. We just kept shooting more and more. He was just so exhausted. He was a different person. I felt we were all different.”

It is these moments that make the documentary both emotional and insightful. Orihuela and her husband, director Bill Bilowitz, sought not only to document the prevalent young artist, but also to reveal the dynamic personality of their subject. They did the same in their previous documentary, the first in their Miami Heights series, of which “Making Sh*t Up” is also a part, when they filmed Hernan Bass. The result of this documentary is a glimpse into Rodriguez’s multifaceted personality. “He’s very resilient and pretty tough,” says Bilowitz. “I think what we captured was that he has a drive and an ambition that overcomes fear and apprehension in order for him to maintain a consistently forward momentum. I never saw him come to a stop.”

For Rodriguez, being the subject of a documentary came with mixed emotions. “When I was younger I always thought I was on TV, so it seemed natural,” he says. “It was only awkward when they asked me questions directly. Otherwise, it was pretty normal.” During the film’s shooting, both the documenter and the subject became used to each other, and the filming became a natural, fluid process. “At one point I sort of just forgot they were there,” says Rodriquez.

On the opening night of the film, with its images splayed across the big screen, things became a little less comfortable. “It was a bit harder to swallow,” says Rodriguez. “It’s hard enough listening to an audio recording of yourself. I felt like vomiting when I was watching the film.”
Despite the queasiness induced by this initial theatrical viewing, Rodriguez has noticed marked, positive changes as a result of the film. “Some people treat me differently now that they’ve seen it. A lot of people, after seeing the film, seem to have more of a somber attitude towards me. Some treat me more seriously.”

Looking back at the production of the film and the final project, Rodriguez is hopeful of what the film might accomplish, while remaining unsure of his feelings about having a permanent artifact documenting him, something that can’t be taken back. “My real hope would be that the film could be seen by an audience outside of the art world and actually provide some kind of exposure to nontraditional art making.” With future screenings of the film in the works, both in Miami and other cities, like Seattle, New York and Los Angeles, “Making Sh*t Up,” Rodriguez is likely to find his hope fulfilled.