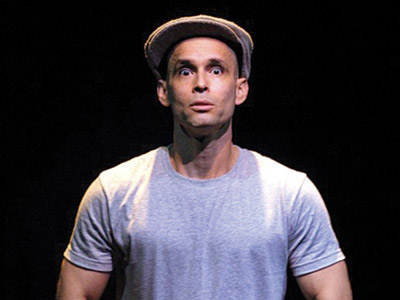 Like a one-man band, Teo Castellanos is a cacophony of characters and vernaculars all rolled into one. Widely recognized for NE 2nd Ave, a performance that incurred many accolades in it’s global jaunts including the prestigious Fringe First Award in the Edinburgh Festival, Castellanos draws from the diverse demographical complexion of Miami to create his characters. Whimsical, brash, sociological, and tragic all at once this sort of schizophrenic performance enlivened a cross-section of humanity that, although unique in many ways to Miami, not exclusive.

But Castellanos also works in symphony with others; he is the founder and artistic director of D-Projects – an urban arts collective focusing on social / political themes. This group sets Castellanos’ personal artistic concerns to movement. Scratch and Burn, a cultural conglomerate of dance and ritual, has carried an anti-war message to audiences throughout the world.

Castellanos has performed in venues from renowned theatres and acclaimed festivals to jails and detention centers. He is the recipient of numerous grants, fellowships, and commissions, including a 75 thousand dollar grant to spearhead a project focused on HIV prevention and AIDS awareness.

He is also affiliated with Tigertail Productions – an organization that, like Castellanos’, centers around the vast socio-economic array of folks in Miami. They presented Castellanos as part of WordSpeak – their Miami teen spoken word and poetry project – at Miami-Dade Public Libraries in late March.

MAG: You are Puerto Rican born, raised in Miami-have you lived here your entire life? How has that shaped and fostered you as an artist?

Teo Castellanos: Yep. With NE 2nd Ave, the piece I did a couple years ago, I wanted to expose Miami, and our different cultures to the local US, and to the world.

MAG: The mix of Miami vernacular in your work seems directly related to your being raised here. Are any of the different characters based on personal experiences, or fabricated from a conglomerate of characters you come into contact with?

TC: It is kind of a conglomerate of characters. Some of it is autobiographical. I basically work using four different things: one is my experience, two is research, three, interviews, and four, fiction.

MAG: What would you say you gain or lose, or is different when you perform with a group or in one of your troupes as opposed to performing alone? How does it change the dynamic of the piece?

TC: The last show from my company (I’m not in it, I’m glad not to be in it, I went from being the only one on stage to not be on stage at all!), Scratch and Burn, is dance theater, and when I work with a body – with five other bodies – and musicians I can do on stage what I could never do by myself. That just opens up a whole other world for me, a whole realm of possibilities.

MAG: I was going to ask how you translate some of these characters into movement – I noticed your mixing of hip-hop and different rituals from all over the world, it’s sort of a different version of the NE 2nd Ave character with all these different aspects to it.

TC: Absolutely. The thing about those two shows is they are vastly different, but they are fueled by the same interest – my interest in culture, religion, and ritual. And in society.
MAG: This is a question you probably get asked a lot– how is your work received by people unfamiliar with Miami, and people in other cities? Because it’s very different from the rest of the US, and in many ways from other parts of the world.

TC: I do get asked that question a lot. As a matter of fact, after I did the show in the Miami area, I told people I was going to start touring. And they said, “how do you think it’s going to go over, do you think they are going to get it?”

To me, I figured it would just be like seeing a foreign film. We don’t get every nuance of Parisian life, or the colloquialism, but we get the story, we understand the film. I thought it would be that way. And sure enough, not only did they relate, but they really got it. Just about everywhere it’s been has immigrants or some form of diversity… I always quote Victor Hugo: “Speak of your village and you speak universally.”

MAG: What is the crux of your solo work? Would you say that one is more personal than the stuff you do in groups?

MAG: Explain the role comedy plays in your work.

TC: Comedy? I wish I could be funnier! Chekhov said that every play he wrote was a comedy. I won’t go that far, but I will say that I definitely try to infuse comedy because I think, and I quote Mary Poppins on this one, “a spoon full of sugar makes the medicine go down.” Humor is so important.

MAG: Explain the political implications of your work.

TC: There’s usually a political message in my work. Scratch and Burn was an outrage against the invasion of Iraq, and war in general. In NE 2nd Ave, I addressed a lot of social and political issues. That’s part of our theology. It varies, but it’s whatever moves me at the time. I went to Mumbai, and was really struck by the poverty there. It was shocking, it moved me to tears. I decided my next piece would be about world hunger and America’s waste and consumerism. That’s what I’m working on now.

MAG: What was the experience of performing in venues like jails and detention centers like? Did it inform your future work?

TC: Yeah, absolutely. As a matter of fact I still work in prisons. What I do with the inmates is basically teach them to express themselves through theater. For me, art is healing. Art is activism. Art is universal.

MAG: You seem to use a very youthful voice both in your movement and spoken performance. You have said you like your works to be multi-generational? What responses have you received from older folks, and how do you think the medium of spoken word or movement or performance relates to them?

TC: One of the things I’m most proud of is the diversity in the audience. One of the most satisfying things about the work I create is to see the mix, not only racially or socioeconomically, but in generation. I intentionally write for both tenets. In NE 2nd Ave, I reference both Trina and William S. Burroughs. Whoever doesn’t get both was just exposed to one or the other. It’s always an educational experience.

MAG: With the WordSpeak event at the Miami-Dade public library you worked with young people?

TC: Yes. I’m the coach for the WordSpeak poetry team, which is project through Tigertail Productions, it’s important to mention them since they are really responsible for the project.
It’s been going on for five years, I came on as coach two years ago, and basically they hold these big slams. From the slams, we get the best poets, and then I groom them and direct them and work with them, and we create some poetry and spoken word. And they go on to perform and compete with in slams across the country. WordSpeak at the library is a slam, it’s free and open to anyone who wants to participate. You just have to be under age twenty.