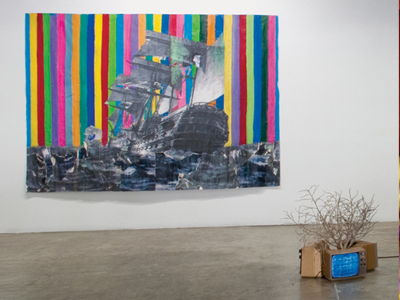 The evolutionary process behind the Wynwood art district is a defining and ongoing one. Since the neighborhood formed, it has been an epicenter for Miami’s progressive, innovative artistic community, thanks, in large part, to the dynamic galleries that compose it. Of these, one of the most recent to emerge is Maor Gallery. Its prime spot on the outskirts of the art district creates a milieu that combines forward-thinking artistic works with Jewish spiritual growth and awareness. “Our gallery gives us a chance to explore Judaism from a different angle,” says owner Chana Gopin. She and her husband, a rabbi serving the local community, saw a void in Jewish representation in the art field and sought to fill it. The result of their efforts is Maor Gallery, named after, in Kabbalistic idiom, the source of all light and the place to which all light gravitates: Maor, the luminary. The gallery’s ultimate goal, according to Gopin, is “to bring light to and create fusion between art and Judaism.”

Working with light as a theme, the gallery opened in December with a show highlighting works by Daniel Azoulay, a Moroccan-born photographer who now runs the Daniel Azoulay Gallery in the Design District. Called “Light in Motion,” the show related light-based photographs to Chanukah, a holiday closely tied with illumination. As such, it stood as an example of the types of shows that Maor Gallery will host. “The work is created or curated,” says Gopin, “in relation to Kabbalistic or mystic topics, exploring Jewish concepts.”

Maor Gallery figures in heavily to Wynwood’s monthly art walks, when Gopin unveils new exhibits to throngs of art-starved individuals. “People are very excited,” she says of the gallery and the artistic possibilities it represents. “They find the concept to be very interesting. It has been in the making for a couple of years, so we are happy to see a positive response.”

Not all the works shown at the gallery will literally tie into light or illumination. However, the gallery strongly associates itself with maintaining a general source of optimism, openness and acceptance in an attempt to supply spiritual inspiration to those who walk through its doors. The relationship it builds between art and the soul inspires a more primal connection to the exhibited works. While other galleries in the neighborhood also feed meaning into their exhibits, Maor Gallery has a very specific vision cemented in a holistic ideology.

The most recent show, a group exhibition called Leaving Egypt, ran for two months and invoked themes relating to Passover. It featured works by Bhakti Baxter, Gavin Perry, John Espinosa and others.

These kinds of exhibits, richly infused with Judaic meaning, will continue to push the envelope of Jewish culture and contemporary art in Miami.