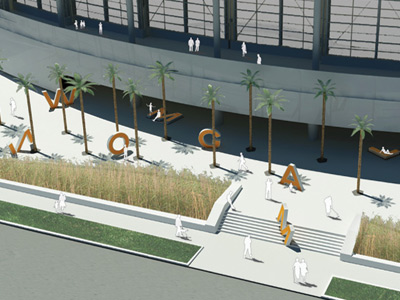 Miami-raised artist Daniel Arsham and his collaborative practice Snarkitecture have been commissioned to create two large signature features for Miami’s new Florida Marlins ballpark. The new 37,000-seat stadium, situated on the site of the former Orange Bowl in Little Havana, is scheduled to open in 2012. The $5.3 million Art in Public Places budget, a requirement for all new Miami-Dade county buildings to set aside 1.5% of the capital costs for public art, will encompass four projects, two of which will be by Daniel Arsham/Snarkitecture. Arsham, along with Snarkitecture partner and architect Alex Mustonen, will create a commemorative marker recognizing the site’s rich history and an installation for the illumination of the exterior columns.

Since graduating from Cooper Union in 2003, Daniel Arsham has become a leading figure in the Miami art world, exhibiting at international institutions, festivals and art fairs. Arsham’s work revolves around the rethinking of our relationship to architecture. His interest in a fluid, impermanent architecture evolved into a multifaceted practice and penchant for collaboration that spans the fields of art, architecture and performance, working with such notables as Jonah Bokaer, Merce Cunningham, Friends With You, Hedi Slimane and Robert Wilson. Such collaborations led to the founding of Snarkitecture with partner Alex Mustonen to further expand the possibilities of spatial manipulation to serve new and imaginative purposes.

“The lighting of Daniel Arsham is something you won’t see in any other ballpark,” said Marlins president David Samson. “It’s something so spectacular, and it’s to be enjoyed by everybody.”

Memories of the old “Miami Orange Bowl” sign form the basis for the commemorative marker by Daniel Arsham/Snarkitecture. These letters are reconstructed in their original ten foot height and orange color and scattered throughout the public plaza on the east side of the stadium. Their positions capture an ambiguous moment between destruction and rebuilding: some stand vertically; others are angled in mid-collapse or submerged in the ground, while others lay horizontally as if at rest. Spelling various words depending on one’s vantage point – Game, Won, and others – the commemorative encourages visitors to stop, look, walk around, touch, contemplate the past and create new memories.