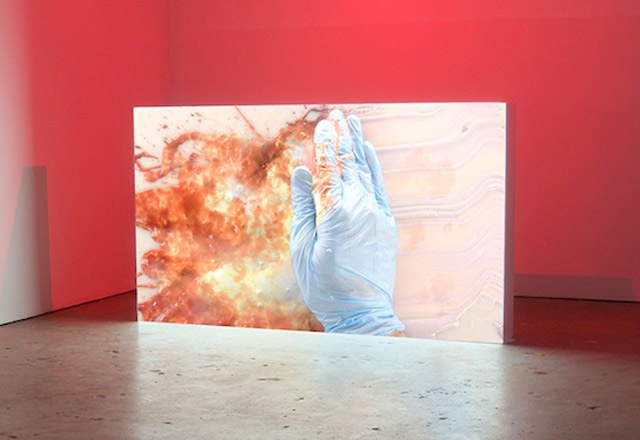 A dose of popular culture made its way into the Dorsch Gallery, most recognizable for presenting works and metaphors far away from the likes of Hollywood, Obama gnomes and Picasso.

Two solo exhibitions from Martin Murphy and Mette Tommerup reveled in color, spectacle and colloquialisms well-known to those outside the realms of academic articulation in visual art. With a rumbling sound in the space (resembling that of a commercial jet in flight), Murphy set the tone for a quietly subversive show alluding to shades of corporate omnipresence, while Tommerup unveiled male sexual prowess and even softer tones of racism and paranoia.

Murphy’s work was a fully-rounded series of sculptures, video installations and conventional video scattered throughout the foreground of the gallery. Modern Trance engaged the viewer in two similar digitally-enhanced video works. Inarguably, Murphy’s centerpiece was ‘Horror Painting’, which showed a liquid (most likely paint) being squirted out over a blank space; but rather than revealing a single color, the liquid was alive, revealing imagery of a blazing inferno. As Murphy’s own hand appeared inside a latex glove, he tried to stamp out the blaze with slaps of his palm, only to exacerbate the fire even more. With one clean swipe, he bulldozed the paint (and the fire) completely away. ‘LA Dreamer’ used a similar digital overlay, with images of the opening credits of Hollywood studios pouring over a pristine bottle of Diet Coke. Surrounding these were blacklit alabaster sculptures and a traditional film format, showing an aerial flyover of New York City (remarkably, produced using a straight-pan camera from the top of the Empire State Building). In sum, Murphy’s dedicated attention to detail in the physical layout of his work alongside sheer technical genius produces not only a crowd-pleaser, but a brain-teaser.

Tommerup’s Full Salute appeared to be a painting show in low profile, but upon closer consideration was a scathing commentary on art history, racist slurs and the physical appearance of erection as an animalistic display of virility. Painted simply, but ably, Tommerup’s use of color was nothing outlandish or jarring; every object was familiar and close to home…often too close. The petals of ripe fruit stand upright as if aroused, the backside of an ‘Obama gnome’ was in full view, a distinct impression was left in the velvet lining of a gun case and a beautifully executed (but grossly offensive in suggesting a ‘black joke’) watermelon baited under a box were all triggers to Tommerup’s keen observation of repressed desire and outdated double-entendres. The main event was an accurately measured (inside the dimensions of the genuine 1907 Picasso icon in its present home) parody of Les Demoiselles d’Avignon.