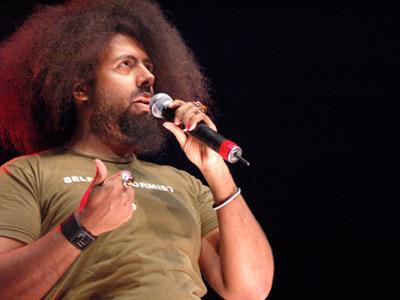 Evading capture or definition, Reggie Watts is the spellbinding vocal artist whose improvised songs of looped vocals delight audiences internationally. Reggie loves to disorientate and confuse people in the most entertaining way and creates an evening of improvised sonic revolution incorporating hip-hop, trip-hop, 80’s pop alternative, nu-metal and classical opera so no two songs, or shows are ever the same!

As a solo performer, Reggie was handpicked by Conan O’Brien to open nightly on Conan’s entire North American “Prohibted From Being Funny on Television” tour. Reggie was featured as “Hot Comedian” in Rolling Stone’s Hot Issue 2010, named SPIN Magazine’s “Best New Comedian” and “Best of CMJ” 2010, and a featured profile in GQ’s Man Of The Year issue 2010. Reggie released his debut comedy cd/dvd ‘Why $#!+ So Crazy?’ on Comedy Central Records in May 2010. He has a new album entitled ‘Reggie Watts Live at Third Man Records’ which will be available limited edition vinyl Spring 2011.