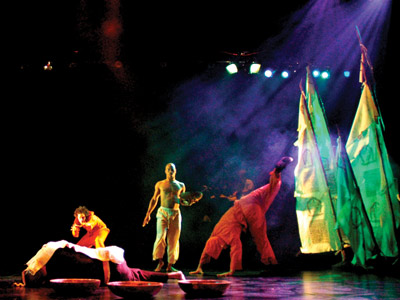 Performance art, by its very nature, is one of the most challenging avenues of expression. One part street theater, one part psychodrama, the best performances are always challenging and unique. At times, these pieces can be provocative to the point of real controversy: Think back to your reaction the first time you heard of an audience being sprayed with “blood.”

Performance art is never predictable or lulling, as mainstream art can be. It survives on a diet of rigorous self-examination and a true need to question the culture in which we live.

That is the heart of South Florida’s Miami Light Project, a not-for-profit arts organization that since 1989 has offered performances in drama, dance, and music by cutting-edge artists from around the world. Beth Boone, MLP’s Artistic and Executive Director, details the organization’s vision. “We connect artists with audiences and serve as a catalyst for dialogue in our community. We focus equally on two main activities: bringing artists from all around the world to perform in Miami, and supporting the development of new work by emerging and mid-career artists who make Miami their home.”

Performances and troupes are chosen from both the national and international levels. Well known performers with years of experience such as Laurie Anderson and Philip Glass have been showcased, but, as Boone states, one of MLP’s major focal points is the development of local talent and the showcasing of new local acts, which brings up the question of how to nurture homegrown art.

Performance art can be a hard sell in South Florida with its crazy-quilt demographics and history of transience. A good portion of the art-going community stays within the borders of mainstream art. These patrons frequent museums or performances with the knowledge that they will be entertained by art they’re already familiar with. It’s art that reinforces their cultural and personal reference points, and goes no further. Boone, a veteran with years in the trenches, understands this completely, but won’t accept it as a paradigm.

“I believe wholeheartedly that this is because people haven’t experienced performance art, and that, once they do, they are easily converted. It’s just getting them in the door the first time that’s the trick.”

So it takes a more-experimental mind to seek out art that questions. MLP offers one of the premiere forums for use by both artists and audience members to examine the concerns that confront modern society. Boone is proud of the depth and variety of the acts MLP sponsors.

“I think our programming represents today’s innovators in a variety of disciplines: artists who have something to say about the world around them, artists who are pushing boundaries and expectations. People who are curious, who are interested in having their thinking challenged, who are interested in what artists have to say about the world – about contemporary issues – would be interested in the artists we present. Often, people get out of a performance the same thing they bring to it. That’s what makes live performance so incredible: it’s a communal experience.” For MLP, that communal experience reaches out to the myriad segments of our area. It’s not elitism that drives MLP’s works, but the desire to reach more and different people. “We are proud to have cultivated an audience that looks like Miami: one that is culturally diverse, that represents many economic abilities, is both young and old, gay and straight, and includes tourists, new residents, and ‘natives’ (i.e., living in South Florida more than 15 years!).”

In fact, MLP has made inroads within this fractured community, noting helpful changes within the audiences over the years. “I’d say that the greatest increase or change has been in the age range, formerly 30-50ish and now 20-60ish. Our programming is very diverse, and this has a direct and dramatic effect on audience representation.”

Miami Light Project, as mentioned, is noted for the broadness and richness of its offerings. Boone details a laundry list of requirements when it comes to determining an upcoming slate of performances, including, strictly on her part, extensive travel to art festivals to see new performers, both national and international, and communications with colleagues about which new artists to tag for further review.

But it’s a sense of wonderment and the desire for fresh, new perspectives that keep Boone and her associates in motion. Like her audiences and the artists MLP supports, she continually searches for those new faces and pieces that make eyes go wide.“I’m always interested in having a good representation of dance, music, and theater. I’m particularly interested in cross – and multi-disciplinary work. And I love wildly eclectic seasons featuring local and international, established and emerging, provocative and accessible, funny and serious works.”

But new and improved theater or dance can’t exist on good intentions. Money is a necessary evil, and always a rare commodity. “Fundraising is and always has been the greatest challenge. Particularly for arts groups,” she notes, “as I don’t think that art and culture are valued as a necessary part of everyday life in our country. But since it’s always a challenge, I don’t rank it as the biggest. It’s a given.” Boone goes on to mention that there is “competition from contemporary distractions”: the Internet, DVDs and video games, the beach, and sheer indifference.

To help battle those diversions, MLP has a brand-new ace in its pocket to the tune of $200,000 from the Knights Foundation Arts Partnership. This grant, given out just last December, has been awarded to MLP, and the organization has decided to put it toward its Here and Now program.

Here and Now was established a decade ago with the idea of sponsoring Miami-based artists, and Boone says MLP considers it their “most important initiative. The Knight Challenge will help us to expand this program and have a greater impact on the lives and work of artists who make Miami their home. With these funds, we will increase the number of artists commissioned, we will provide expanded professional development opportunities for these artists, and we will expose their work to people from around the country.”

MLP has numerous other programs that delve into other areas of the arts. It’s own core programs are its Contemporary Performance Series, which has presented over 300 performers to Miami; Light Box Studio, which nurtures South Florida-based artists, aids in finding new audiences, and provides a home base for two resident theater companies; Commissioning New Works, which, through its presentations, has helped to make Miami a major artistic center; the educational programming and community outreach activities that are provided by Light Box/Out of the Box; Miami/Project Hip Hop, a cultural-exchange forum; and Art on the Walls @ the Light Box, which gives visual artists the opportunity and space to present their works.

In order to fulfill another part of its mission, MLP has partnered with other organizations across the United States. Some of these are The Hip-Hop Theater Festival of Brooklyn, NY, which nurtures innovative hip-hop works and serves urban communities by offering touring U.S. and international artists; Youth Speaks, out of San Francisco, CA, which helps to empower leaders and artists through written and spoken stories; Global Action Project of New York City, which provides media arts and leadership-skills training to underprivileged kids in both the U.S. and abroad; and La Peña Cultural Center of Berkeley, CA, which promotes peace, social justice, and understanding through the arts, education, and social action.

Working on a local basis, MLP has joined with Youth Expressions Inc., a non-profit program that helps at-risk urban teens develop the skills needed to become productive, confident adults; the Miami Workers Center, an organizing group for low-income communities and workers; and The Adrienne Arsht Center for the Performing Arts here in Miami.

When asked about the origin of the name Light Project, Boone recounts that it comes from “an obscure reference to an architectural construct/concept called a light box,” but that over time, other meanings have been attached to it: “ideas, beacon, a place of creative inspiration.” This is the end result of 20 years of combining hard work and late nights with inspiration and faith in artists’ ability to tap into that which is both personal and universal. Miami Light Project has carved out its own place of excellence in helping to build the creative spirit of South Florida.