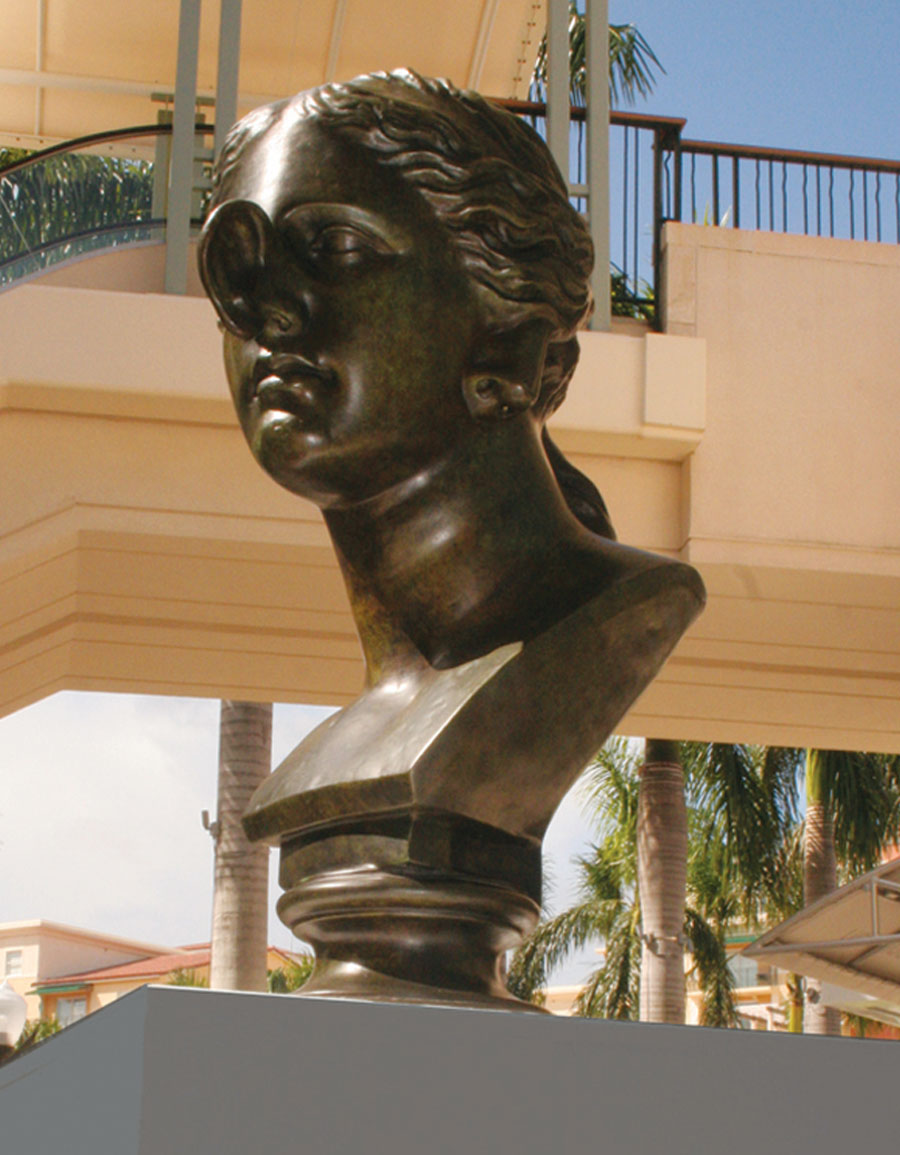 Until May of 2006, you will have the opportunity to enjoy a collection of Salvador Dalí’s monumental sculptures, presented all together for the first time at the Village of Merrick Park in Coral Gables. Organized by A+ Gallery, this may be a unique occasion to revisit the work of one of the most prominent artists of the Twentieth Century.

Dalí was, at different times in his life, an anarchist, communist, Cubist, Surrealist, monarchist, and avowed mystic. With an exuberant imagination and remarkable craft, Dalí (a fashion dandy who once declared himself divine and managed to outrage most of his avant-garde comrades) became as famous as Picasso. So bizarre and intense was Dalí’s persona that –some say– it ended up harming his art.

It all happened well before his death in 1989. By the 1960s Surrealism and its premises had come to seem quite conventional. By the 1970s Freud’s theories –a backbone of the Surrealist program– were on the decline, while feminist art theory exposed Surrealism as a “men’s club,” though to be fair misogyny had pervaded most Twentieth-Century movements. Dalí’s support of Franco’s regime alienated younger generations who saw him as proto-Fascist. And yet, one shouldn’t forget that Dalí liked controversy and developed a persona that he shrewdly used to attract the public interest.

But back up, to the time when Dalí helped change the way we see the world. In the late 1920s Dalí had become an important member of the Surrealist circle, with a fresh pictorial vision much needed to revitalize a movement already in crisis. His “critical-paranoiac method” consisted of probing the mind with traumatic imagery in order to tap into deeper mental states, where conscious associations slip away. This vision came to dominate approaches to Surrealist activities during the era.

Unlike Constructivism or Cubism, when it comes to sculpture, Surrealism is not considered a big movement. Perhaps it has to do with Surrealism’s main principle, the Freudian unconscious, which was recreated so successfully in Surrealist literature, movies and in the paintings of Miró, Masson, Tanguy and Dalí.

Of course, there are the sculptures of Arp and Miró, but their style is very different from that of Dalí –who started experimenting with objects and figures in the 1930s. Pieces like Bust of Joella Floyd, Surrealist Object Functioning Symbolically or his Retrospective Bust of a Woman (a female bust donning a loaf of bread with inkwell fountain and two figures from the Angelus of Millet) are sort of Dada pieces, where the Spanish master successfully realized some of his early pictoric ideas. Better known yet are his Lobster-Telephone and the Venus de Milo with Drawers from 1936, designed by Dalí but actually made by Marcel Duchamp (stop by a little blue Venus inside Art+ Gallery).

Though Dalí’s paintings of the 1930s and early 1940s were consistently small (his famous Persistence of the Memory is 9 inches across), as he grew older, his pieces became bigger in size. One reason is that Dalí believed the mind to be immaterial, that is, it occupied no space. Paradoxically, most of these small paintings were big in the sense that they showed a monumental expanse, only bounded by the mountains of Cadaqués and the port of Figueres.

The statues presented at Merrick Park are exceptional in that they are much bigger –nothing like Dalí’s smaller and better-known output of objects, assemblages and jewelry. ¿Why did he choose to produce these big mythological and religious statues? In a way, these pieces could be seen as a scientific justification of his religious beliefs.

After his visit to America and the dropping of the A-Bomb in Hiroshima (in 1945), Dalí’s imagery obviously changed. He switched his attention to metaphysics, the structure of the atom and monumentality. At the time, he wrote: “Recent discoveries in the field of atomic disintegration of matter throw light on one of the most important myths, that of resurrection.”

In his “Mystic Manifesto” of 1951 he declared: “The new epoch of mystic painting begins with me.” Then, throughout the 1960’s Dalí’s art turned more classical and sacred. In his “Fifty Secrets of Magic Craftmanship” he gives the highest grade to Vermeer de Delft, followed by Velazquez and Raphael.

Since the mid-1960s, Dalí was involved with his own museum –an old municipal theater in Figueres, later inaugurated in 1974 (with a design of architect Emilio Pérez Piñero) as the Dalí Theater Museum.  Some of the panels inside the building, such as the huge Palace of the Wind, installations like the Mae West Room and the Palace of the Wind’s Bedroom had to be thought of monumentally.

Positioned around the garden promenade of Merrick Park, right between Nordstrom and Neiman Marcus you can enjoy statues like The Cubist Angel, Perseus and The Cosmic Elephant –among others. They play a cohesive whole because most of these pieces belong together in this late style of the Catalan master.

First, one notices Dalí’s elongated, distorted bronze shapes, rendered expressionistically. They appeared “softened,” as if the human form takes shape seen through a liquid medium (water is a constant in Dalí’s work).

Next to Neiman Marcus and the Miraflores Arcade is Gala Gradiva. A female figure with her arms extended stands over a hollow rectangle. Gala (former Mrs. Eluard) is a powerful constant in Dalí’s work for more than fifty years. Dalí used the image of Gradiva, a heroine of a story by Wilhem Jensen, during his Surrealist period in the 1930s.

Otorhinological Head of Venus was originally made of white plaster and set on a pillar (the one being shown in the exhibit is a bronze). Dalí made an identical version for his 1970 exhibition in Rotterdam. A variation of the bust of Venus at the Louvre, an ear protrudes from the statue’s profile while a nose appears right where her ear is supposed to be. We also find a nose (out of place) in Dalí’s Dematerialization near the Nose of Nero from 1947, in which the Cesar’s missing appendage floats before his face, in mid air.

Dalí was famous for his wit. Nude Ascending the Stairs is a three-dimensional pun on Marcel Duchamp’s famous Nude Descending the Stairs, a landmark of Dadaism. A female figure climbs the stair-like shell of a snail (one of Dalí’s favorite “soft” symbols).

Twisted Christ belongs into a style that Dalí scholar Robert Descharnes labels “nuclear mysticism,” a baroque manner increasingly dependent upon a bizarre imagery “set between heaven and earth playing with the idea of levitation.” The Catalan master painted his famous Christ of St. John of the Cross using Rauss Saunders, the Hollywood stuntman as a model. Yet, it’s Dalí’s Crucifixion from 1954 that remains closer to this statue (shown next to A+ Gallery on the mall’s third level).
In spite of Dalí’s seemingly anti-modern posture, he always experimented. His work evinces an open mind and a desire to push his style forward. From his earliest Impressionist works, through Cubist, Surrealist, and Purist influences –all the way into his Classical art– he continued to integrate a plethora of styles into his own work, creating an amazing eclectic whole.
Robert Descharnes states that toward the end of his life, Dalí seemed to acquire a “quasi-mediumistic perception of that labyrinthine universe of the sensitive and supersensitive, where carried his spectators off into life, death, prenatal life, and life after death.”