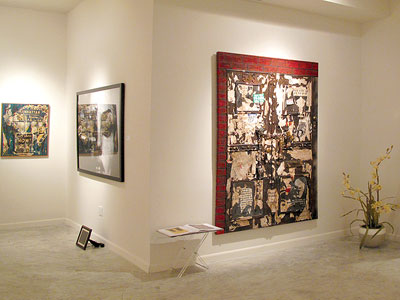 There is a new gallery in the Wynwood Art District. Like many businesses in the area, the exterior is unassuming, merely hinting at what it contains. Walk inside and it becomes clear that something dynamic is happening; something that deepens the well of art in the neighborhood and broadens its breadth and variety.

Its name is Myra Galleries and it is run by Arden Portakal, a third generation gallerist, and Guinam Lee. This husband-and-wife team hails from New York, where they operated the New Era Fine Arts Gallery, which Portakal owned for nearly 25 years. Three years ago, the couple migrated to Miami. They decided to open Myra Galleries in February of this year with a show that featured pieces by New York-based mixed-media artist Burhan Dogancay, whose work has been included in museums around the world and sold in auctions at Sotheby’s and Christie’s.

The gallery concentrates mainly on exhibiting young artists from across the globe, many of which already have a wide international following. They include Dinorah Delfin, a Venezuelan-born photographer, Tokyo-based Haruna Sato, and Paul Ching-Bor, a professional artist born in Guanzhou, China, who currently operates out of New York City. Beginning April 8th, they will highlight the works of Korean artist Kwon Soon Ik. “He is well known in South America,” says Lee. This connection between global artistic interest and culture is an example of the kind of theme she likes to explore when exhibiting artists.

That show will be the second at Myra Galleries and will run through May 31st. Despite the fact that it is new, the gallery has jumped headfirst into the local scene. They remain open through most of the week and encourage visitors to spend time with the work on display and to ask questions about the artists being exhibited.

Public response to the gallery has been enthusiastically positive. “We are very surprised,” says Lee of the reactions she heard during February and March’s art walks. “We didn’t know what to expect or how people were going to appreciate our exhibition because we are new. Many people came to me and said they really enjoyed our gallery, and that we have high quality work.”

For a gallery just getting on its feet, that’s quite a compliment to receive. In marking the quality of the work exhibited at the gallery, though, it’s right on target. As Myra Galleries continues to grow, it seeks to expand its roster of international clients and expose the public to works that are unusual, creative and evocative. “I plan on traveling to Korea to look for up and coming rural artists,” says Lee of her future plans. It’s just a taste of what’s to come.