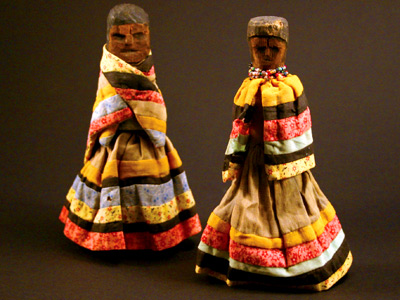 “Visitors will have an opportunity to view a stunning array of Native American art forms, from the spectacular totem poles and ritual masks of the Northwest Coast to the finely crafted patchwork and baskets of the Seminoles and the mysterious artifacts of the Tequestas, who lived at the mouth of the Miami River hundreds of years ago,” says Chief Curator Steve Stuempfle.

The first public display of the Miami-based Glucks’ collection of Native Arts from the Northwest Coast will showcase over 200 art pieces from what is considered to be one of the finest private Northwest Coast collections in the world. On display will be totem poles, ritual masks, amulets, pipes, drums, rattles, woven blankets, necklaces, bracelets, baskets, bowls, spoons and fishing hooks from the late 19th to the 21st centuries. Among the many artists and distinct cultural groups featured in the exhibition are Henry Hunt (Kwakwaka’wakw), Mary Ebbets Hunt (Tlingit), Dempsey Bob (Tlingit), Bill Reid (Haida), Robert Davidson (Haida), Stan Wamiss (Kwakwaka’wakw) and Terry Starr (Tsimshian).

Seminole Arts from Florida Collections is a selection of masterpieces from collections at HMSF and several other Florida museums. Pieces on display will include patchwork, beadwork, silverwork, basketry and dolls that date from the late 19th to the late 20th centuries. Among the featured artists will be Louise Billie, Jimmie O’Toole Osceola, Brian Zepeda, Linda Mae Beletso and Donna Frank.

Also on display is First Arrivals: The Miami Circle, a selection of the museum’s permanent exhibition titled Tropical Dreams: A People’s History of South Florida. This is the only place where the public can see artifacts from the Miami Circle, a formation discovered by archaeologists in 1998 at the mouth of the Miami River and believed to have been used by the Tequesta Indians for a religious building or chief’s house. This archaeological display also features artifacts from other South Florida prehistoric sites, including wooden clubs, shell tools, pottery, bone and shell beads, shell and clay pendants and a dug-out canoe. In addition, visitors can experience the process of archaeological excavation through an interactive computer program.

These three exhibitions will be accompanied by a variety of educational programs, including free Family Fun Days on second Saturdays, and panel discussions on third Thursdays. Tours of the exhibitions will be offered on a regular basis to both schools groups and the general public.