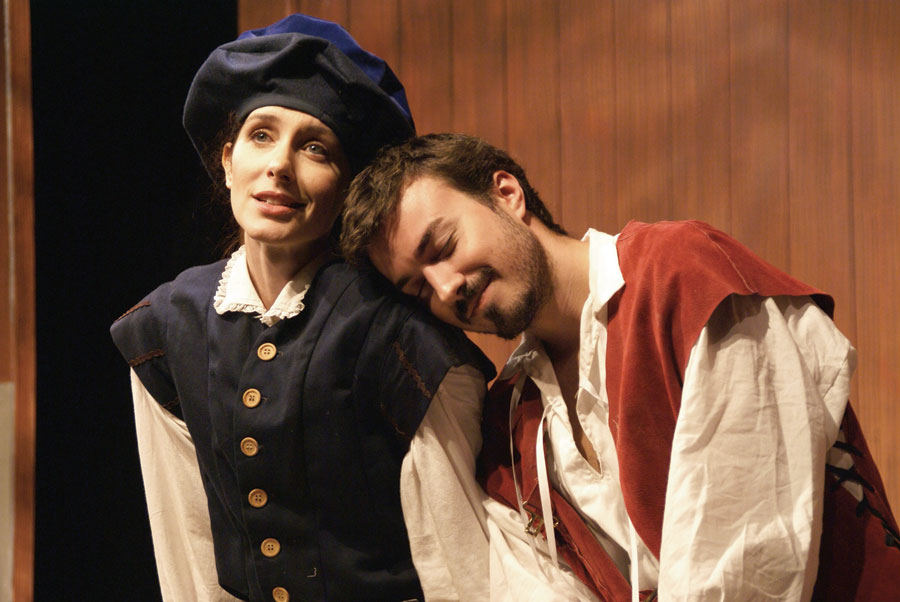 It is not the largest theater on the most illuminated Broadway-like street, it stands alone and unpretentious, warm and inviting, charming and unexpected; New Theater in Coral Gables is curiously small for the worlds that come alive within its walls. A lively team, lead by Artistic Director Ricky J. Martinez and Managing Director Eilleen Suarez, has made it possible for this multicultural theater to provide audiences with an array of productions by early, mid-career, and classic playwrights throughout its 23 seasons. This season kicks off with William Shakespeare’s romantic comedy, “As You Like it”. The production stars enthusiastic new comer Cliff Burgess as Orlando de Boys, and, no stranger to the New Theater, Elise Girardin as our Rosalind.

Set in the Duke’s Palace and the Forest of Arden in the 1600’s, “As You Like it” is one of Lord Shakespeare’s most wittingly amusing plays. Comedy, confusion, love, lust, and the art of the Shakespearean verse all contribute to the play’s charm and its ability to withstand the tests of time. Each night’s intimate audience travels into the Forest of Arden where love-sick Orlando wanders clueless of his love’s proximity. Rosalind, disguised as a man to ensure safety on her travels, spins the forest and its residents into a web of misunderstandings in her search for the assertion of our hero’s truest love. Rosalind manages to maintain her identity a secret between only the audience and herself with the help of her loyal cousin Celia and Touchstone, the “court-fool” and comedic relief of the play, superbly portrayed by University of Miami graduate Joshua David Robinson. A vigorous cast that uses the entire theater as its stage, an incredible rendition of the popular “All the World’s stage” monologue by talented Elizabethan Theater buff Clint Hooper, and a beautifully entranced audience are sure to aid in Rosalind and Orlando’s quest for each other.

The New Theater’s production of this classic calls to the Shakespeare aficionado as well as the newbie as a string of talented actors, including New Theater veteran Katherine Michelle Tanner as the adorable Celia, and Christopher Vicchiollo as the misguided Oliver, master the Shakespearean language and deliver it with the desired poise and fluidity that make this one of Shakespeare’s most accessible plays. Performances of “As You Like It” at The New Theater, located just one block from Village of Merrick Park at 4120 Laguna Street in Coral Gables, will run through September 14th, Thursday through Saturdays at 8:00PM and Sundays at 1:00PM. Additional Sunday performances will be held at 5:30PM on August 17, 24, 31 and Sept. 7.