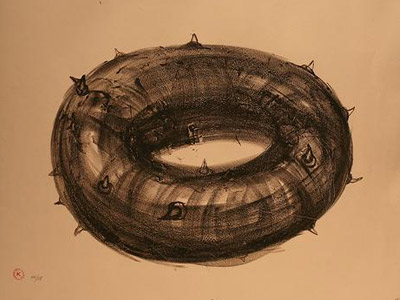 Panamerican Art Projects presents a solo exhibition by Cuban artist Kcho (Alexis Leyva Machado). Internationally recognized by his iconic installations of found objects, Kcho has placed himself among the leading contemporary artists. Since he began to emerge in the art scene his work has kept a minimalist approach, showing a profound respect for the objects that he brings into his pieces. Very often he would integrate found or already-made objects to other elements created just for the work. The result is a coherent ‘object’ that seems to be meant to be that way. Sometimes he would recycle materials such as wood pieces, collected from the seacoasts, and make his sculptures with them, giving the impression of already-made objects.

In this exhibition, the gallery presents a selection of paintings and works on paper. Also for the first time in Miami, the gallery is exhibiting an installation from the Archipiélago series, of 2005. This piece is based on an inner tube, which has become a sort of trademark for him. Inner tubes are one of the powerful symbols he uses throughout his oeuvre. Another recurrent symbols in his oeuvre are paddles and boats, constantly emerging individually or as part of a group. This iconography corresponds directly to the message he is trying to convey: a sad remembrance of the Cuban exodus by sea.

His paintings, on the other hand, show a less ‘constructed’ approach. His signature technique: charcoal on canvas, allows him to produce easy large pieces. In the paintings he is deconstructing the same elements that he uses in the installations. He is also keeping the same minimal approach that he uses in his sculptures: the elements selected are isolated; there is no other distraction or filling of the space.

Kcho's works are in prominent museums and collections; and also being part of prestigious biennials around the world. Pieces by him have been included in important landmark exhibitions, such as the current one at the Miami Art Museum: NeoHooDoo, Art for a Forgotten Faith.

Concurrently, the gallery will be showing a selection of works of four other Contemporary Cuban artists of different generations: Manuel Mendive and Roberto Fabelo, from an older one; and Agustin Bejarano and Roberto Diago from a younger. Mendive and Diago’s works shows a clear African influence while Fabelo and Bejarano’s tends towards a more universal language.

Manuel Mendive is known for his representations of mythological allegories of the Afro-Cuban traditions. In his very personal style he recreates the Afro-Cuban Pantheon through its legends. In his paintings we can identify primarily two styles: his earlier works has a more ‘naïve’ approach, while the latest seems to be tending towards a more expressionistic form.

Roberto Fabelo’s work is distinguished by its fable quality. He creates a whole world of winged creatures, which includes persons and animals. His subtle use of color influences the outcome: delicate paintings and watercolors that reflect his interior world.

Agustin Bejarano started mostly as a printmaker. His early prints were characterized by a narrative discourse, which he later translated to his paintings. His main themes have been always around his familiar life and the domestic surroundings.

Roberto Diago was known by his textural paintings. Lately he has being more concerned with the social problems in Cuba and as a result his work is reflecting this tendency. He is incorporating the use of photography to his pieces, as a way of representing this reality more accurately.