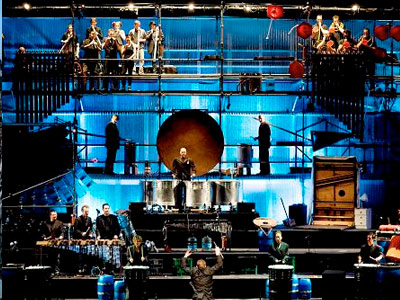 A new production from the creators of Stomp makes its U.S. debut in Miami this fall launching at the Adrienne Arsht Center during its 5th anniversary season. The Adrienne Arsht Center for the Performing Arts of Miami-Dade County proudly announces the kick-off to its 5th Anniversary Season with the U.S. premiere of Pandemonium: The Lost and Found Orchestra. From the creators of the blockbuster hit Stomp, this modern, urban symphonic adventure features a cast of 25 performers plus a 30-member choir of local Miami singers. Fresh from sold-out performances in London, Sydney, and Amsterdam, Pandemonium is poised to take Miami by storm, during September in the Sanford and Dolores Ziff Ballet Opera House. Where Stomp creates rhythm with everyday objects, Pandemonium transforms everyday objects into an excess of invented instruments. Performed by the LFO (Lost and Found Orchestra), Pandemonium recreates every section of a symphony orchestra, using musical saws, bottles, whirly toys and traffic cones. Out of chaos emerges an orchestra.

“The adventure, the imagination, and the sonic delight that is Pandemonium is the perfect way for the Adrienne Arsht Center to launch our 5th Anniversary Season, one month early,” said M. John Richard, president and CEO of the Adrienne Arsht Center. “We are delighted to host their U.S. debut, as the first stop on the Pandemonium North American tour!”

Reworked for 2010 with a dazzling array of homemade instruments, a 25-member mix of veteran Stomp performers, classical musicians, physical comedians and aerialists, Pandemonium climaxes with the human voice being added to the mix: what begins with simple melodies plucked, blown, thumped and brushed into life ends in a complex symphonic and choral celebration. A 30-member local choir will contribute vocals. Luke Cresswell serves as onstage conductor of the 50 plus member company and will perform in Pandemonium.

Luke Cresswell and Steve McNicholas were approached by The Brighton Festival (UK) commissioning a new work for its 40th anniversary. In only six months, instruments had to be invented and reinvented from scratch, and an entire score composed. With the help of a crew made up of experienced Stomp personnel, expert instrument designer Paul Marshall advising, and with UK musicians who were prepared to abandon their instruments and learn how to play saws and hosepipes, LFO premiered there in May 2006. Since then LFO has broken box office records at Sydney Opera House, and played extended runs at London’s Royal Festival Hall and Amsterdam’s Carre Theatre.

Luke Cresswell is a self-taught percussionist from Brighton, UK. His session work as a drummer and rhythm programmer includes Beats International, Bette Midler, Elvis Costello and Bryan Ferry. After working for several years as a street musician and performer, he first created Stomp in 1991. His work as a performer in Stomp includes the Oscars, the Emmys and Quincy Jones’ album, Q’s Jook Joint. He has directed, with Steve McNicholas, several award-winning commercials and short films. He received an Oscar nomination for the film Brooms, an Emmy nomination for Stomp Out Loud and co-directed the award winning giant-screen films, Pulse: a Stomp Odyssey and Wild Ocean 3D as well as the Stomp inspired feature Vacuums. He has also received a special achievement award from the Chicago Human Rhythm Project.

Steve McNicholas, from Yorkshire in the UK, has worked as an actor, singer, musician, and writer with various theatrical and musical groups, starting out with the Bradford Theatre Group in 1973. Through the eighties he worked with Cliff Hanger, Covent Garden Community Theatre and Pookiesnackenburger. Despite also being an original member of the accapella group, the Flying Pickets and a final appearance in Mr. Bean, Steve no longer performs. He shares directorial credits with Luke Cresswell on Stomp based films and commercials. With Cresswell, he composed the soundtrack to the Showtime movie, RIOT, and shares the Oscar and Emmy nominations for his work on BROOMS and Stomp Out Loud, and co directed the award winning giant-screen films Pulse: a Stomp Odyssey and Wild Ocean 3D. Cresswell and McNicholas are currently in production for two new 3D movies, The Last Reef and Great White Shark 3D.

Next year will mark the 20th anniversary of the first Stomp production; it has been running in New York for 16 years and in London for eight years.  Stomp has toured the globe almost continuously for 15 years and has been seen by over 15 million people in 48 countries on five continents. It is the winner of numerous awards including an Olivier Award for Best Choreography (London’s Tony Award); an Obie Award; and a Drama Desk Award for Unique Theatre Experience. Cresswell and McNicholas have received an Academy Award nomination for the short film Brooms, four Emmy nominations and one Emmy Award for their acclaimed HBO special Stomp Out Loud, a Grammy nomination, and their IMAX films have garnered numerous awards internationally. Stomp has been seen in on shows ranging from The Academy Awards (produced by Quincy Jones) to Mister Rogers’ Neighborhood, and in venues including The Acropolis in Athens, Greece.  Stomp has been parodied on Saturday Night Live and The Simpsons, and been an answer on Jeopardy.