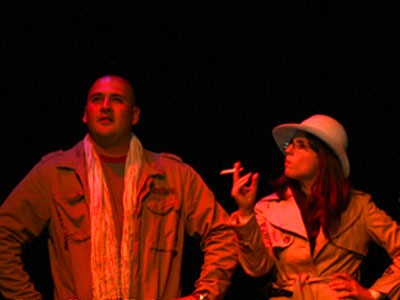 Parked is a play in one act about two architects, Luke (Ozzie Rodriguez) and Lorena  (Nicole Garcia), friends from childhood, who find themselves faced with the challenging project of designing a park where every other business and architectural venture has failed. As they reach their deadline of 48 hours, pieces of their lives, untold to each other prior, begin to unfold and they grow towards a new intimacy until the final climax of the play where the question stands: will they grow closer still or will a newly created rift between them go un-repaired.

On one level this is a story about love, on another it is an allegory for global and political tensions, such as that between Israel and Palestine.  Parked has been awarded several honors. In 2007, the Arkansas Repertory Theatre awarded Vanessa Garcia a two-week residency entitled Voices at the River to workshop this play. Later, the play was invited to travel to the Netherlands for an American Theatre night at The Chameleon Theatre in Amsterdam. Now the play is back in Miami.

“The production will be simple, two actors, minimal props, and the audience, the way theatre once was. Actors and dialogue, engaging an audience, stirring their emotions and returning them to the world, changed…I think that has real power,” says Parked writer Vanessa Garcia.