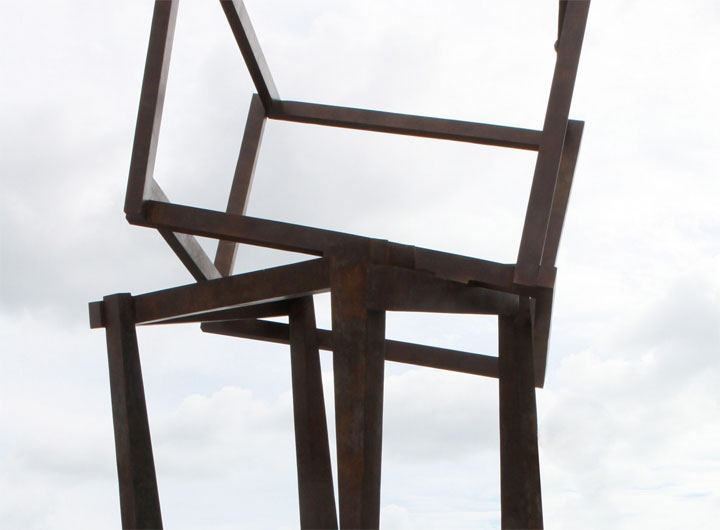 By the early 1970s, works of minimalism had come to dominate the landscape of public sculpture in the United States. Characterized by reductive, geometric forms fabricated in raw industrial materials like Corten steel and aluminum, its ideal products represent an exploration of the essential nature of sculptural practice and experience, engaging viewers in a carefully organized phenomenology of volume, weight, mass and theatricalized viewing space.

For the last decade, Paris-based American artist Jedd Novatt has been employing and manipulating key minimalist visual and material tropes—the cube, unyielding medium, towering scale—in order to evolve the now long-stalled project beyond its traditional static and reflexive nature. Chaos Bizkaia (2012, bronze) and Chaos SAS (2013, stainless steel)—twisting, slipping, seemingly unstable stacks of monumental open rectangles—activate the lush tropical landscape of PAMM’s new sculpture garden with implied motion. As if arrested in a process of being formed from the primordial state of disorder to which the series title alludes, in a perpetual state of becoming, they inspire awe and impart grand emotions unfamiliar in the history of minimalism.