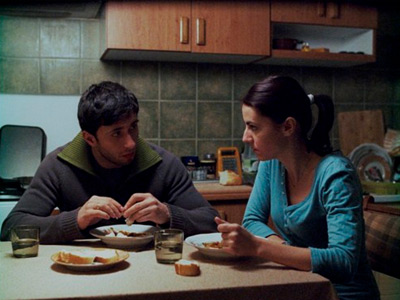 The Romanian film Police Adjective (Politist, adj.) will be screened at the Miami Beach Cinematheque on February 26th through 28th, 2010 at 9:15 p.m.

Police Adjective, like 4 Months, 3 Weeks, and 2 Days, is a stunning example of minimalist realism in the New Romanian Cinema. Cristi is a policeman who refuses to arrest a young man who offers hash to two of his school mates. “Offering” is punished by the law. Cristi believes that the law will change, he does not want the life of a young man he considers irresponsible to be a burden on his conscience.  For his superior the word conscience has an entirely different meaning.

Director Corneliu Porumboiu previously made the ironic comedy “12:08 East of Bucharest.” Now Porumboiu takes the police procedural and crafts it into a sly commentary on the state of Romania and on the responsibilities of being a citizen. The first half of the film may bore American audiences used to the fast pace and frantic cutting of Hollywood cop films. But if you are patient, “Police, Adjective” pays off handsomely at the end. The slow early going are simply to reflect the slow, dull work that cops really have to do on stakeouts and have to suffer through pursuing a case.

Porumboiu has a wry sensibility and finds humor in one man’s quiet rebellion to authority and to a law he just doesn’t think is fair. But this is a film where a phone ringing can be the most exciting thing to happen in a scene and where the film’s final climax involves reading definitions in a dictionary (a Romanian dictionary).

Taking a line from a Zen koan as her title and starting point, Elvia Rosa Castro reflects on the art of Enrique Martínez Celaya. The Jack Shainman Gallery is one of the most multicultural, multiethnic, … +

A Conversation with Ell... +

Cuban-born collector and philanthropist Ella Fontanals-Cisneros has dedicated the past four decades to the advancement of Latin American art. Since 2002, her Miami-based Cisneros Fontanals Art Foundation (CIFO) has granted more than $1.5 million to … +

With the arrival of Facebook in 2004, a new frontier for communications and interpersonal relationships was established. With many in favor – and no less against – the Social Network stands up today with more … +

Thirty-four years is a long time to be in any business, let alone in one as seemingly fickle as the art business. As the art world ponders whether it’s hit a plateau or if its … +