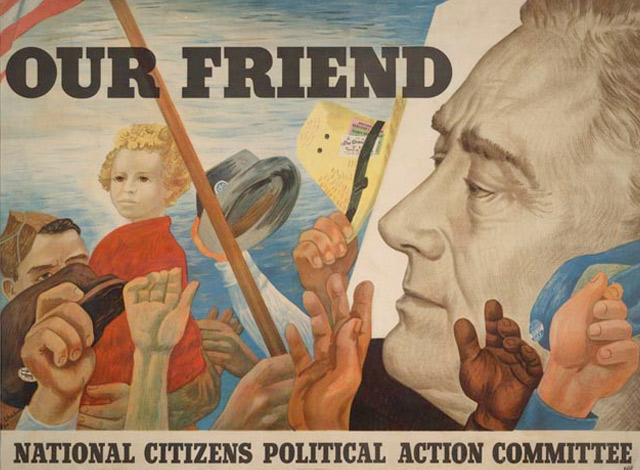 This installation, which showcases election posters and other political ephemera from the United States and Europe between 1918 and 1945, draws from the collections of The Wolfsonian–FIU and the Mitchell Wolfson, Jr. Study Centre. Highlights of the exhibit, on display include thirteen political posters as well as library materials and rare books that raise intriguing parallels between the featured era and today’s political advertisements. The exhibition will also include Political Advertisement (1952–2012), a compilation of American television campaign spots by Antoni Muntadas and Marshall Reese. A public program is being planned for Sunday, November 4th to highlight the work of these video artists.

Politics on Paper and Political Advertisement VII, together, provide a window into ways in which the means of mass communication used to reach voters have changed over the twentieth century—and into the twenty-first. The election posters from the first half of the twentieth century “exploited graphic techniques developed by propaganda agencies during the First World War,” notes Jon Mogul, co- organizer of the exhibition and assistant director of research and academic initiatives (other co- organizers were Lisa Li, exhibitions manager, and Francis X. Luca, chief librarian). These posters, as well as the books, pamphlets, stickers and other materials on display, were key means of political communication during a time when electronic media were still in their infancy. The video compilation Political Advertisement VII covers the period from the dawn of television advertising in the 1940s through the 2008 election, showing how the techniques of product advertising have increasingly come to influence the conduct of election campaigns. Displaying these works is a component of The Wolfsonian’s continuous investigation into the continuities and contrasts between the past and present, and its commitment to empowering people to become critical viewers of the messages generated by mass media.

On Sunday, November 4th at 2 p.m., The Wolfsonian hosts the public program Political Advertisement (1952-2012) with Antoni Muntadas and Marshall Reese. Muntadas, whose works extend from video to publishing to multi-media installations, has been internationally recognized for his piercing examinations of the media and other channels of information. His art has been featured throughout the world including at The MOMA in New York and at the Museo Nacional Centro de Arte Reina Sofia in Madrid, Spain. Reese Poster, Vote Communist, 1924 Hugo Gellert (American, b. Hungary, 1892–1985) Published by the Workers Party, New York is a video and installation artist and poet who, in addition to his collaborations with Muntadas, collaborates on installations, limited edition multiples, and artists’ books that have been exhibited at the Cleveland Museum of Art and Museum fur Angewandte Kunst (MAK) in Frankfurt, Germany, among many others. Muntadas and Reese have been documenting the selling of the American presidency since 1984. Edited without commentary, the artists show an endless stream of candidates marketed like commercial products. The development of the campaign ads over time emphasizes the sameness of the issues amongst changing visuals.