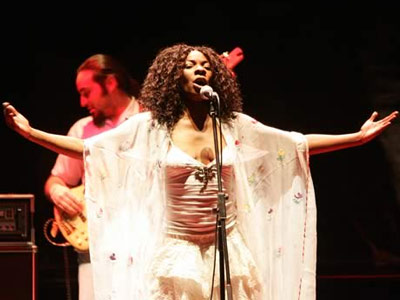 Following Buika’s sold-out US debut concert here in Miami 2007, South Florida audiences have been awaiting the return of one of Latin music’s most acclaimed new stars. Her enchanting voice and overwhelming stage presence left the audience mesmerized, many of them in tears of emotion. Buika returns to Miami for one night only on Thursday, July 9th at the historic Gusman Theater in downtown Miami.

Concha Buika’s voice is a burst of passion from a flamenco star that lives with an open heart. “Think of Billie Holiday mixed with a hint of pop star Sade, and the spirit of the buleria, and you have some idea of her range,” writes The London Times. Born to African parents from Equatorial Guinea, Buika grew up in Majorca, Spain. She spent much of her childhood in the company of the island’s gypsies, who introduced her to their flamenco repertoire and attitudes.  Moving to Madrid, she worked as guest vocalist on various music projects until she met renowned Spanish producer Javier Limón, with whom her career hit its stride. Her 2005 CD Mi Niña Lola was nominated for Latin Grammy Album of the Year, and created a sensation in World Music, Latin music and jazz.

Buika’s live concerts of prestigious concert halls and festivals worldwide fulfilled the CDs promise, leaving awestruck audiences and spellbound critics. She has gone from struggling artist to a trailblazing force in contemporary Spanish music. She is at the crossroads of many genres – a place where jazz, flamenco, copla and neo-soul come together in a sublime, musical pact.