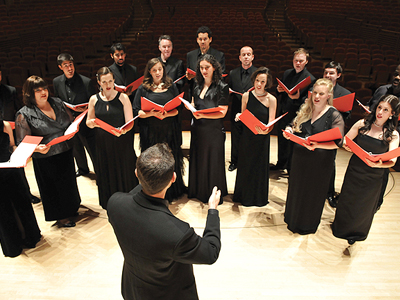 At St. Cristopher’s by the Sea Church in Key Biscayne a palpably excited audience sits still in the dark. A group of singers slowly descends onto the stage – with candles in their hands, they create a surreal, angelical glow.
Like Seraphims, the fiery angels of the highest order who sang praises to God, the choir presents the listeners with ardent renditions – a selection of Renaissance choral works  by Palestrin and Josquin Des Prez, among others.

During the performance of Gregorio Allegri’s Miserere, the musicians vanish from stage, later reappearing in the front, back and sides of the church, encircling the audience in a robust, deeply resonant sound.
A patron of more traditional classical concerts might wonder what on earth is going on, but to the enthusiastic followers of the Seraphic Fire & Firebird Chamber Orchestra, this concert, entitled “The Musical Da Vinci Code” is another of their intriguing productions.

“It’s magic on stage,” said Michael Peyton, one of the patrons in the sold-out house. “If God sings this is how he/she would sound like.”

While it is said that whoever lays eyes on a Seraph is instantly incinerated due to its immense brightness, the angels from Seraphic Fire seem to strike their fans with earthly infatuation.

Peyton, a marketing executive at WRLN, says he and wife Mary Ellen have attended every one of their performance for the past 8 years.

“You don’t get to hear a 13th-part harmony or feel moved by music from 300 years ago everyday,” he said.
“This group is a fantastic contribution to the cultural balance of South Florida.”

The inventive ensemble is the brainchild of founding artistic director Patric Dupré Quigley, whom at 26 was the youngest recipient of the Robert Shaw Fellowship, an award that honors young musicians’ commitment and aspirations to professional careers.

Since 2002, the organist and piano player has been the group’s centerpiece, giving the ensemble focus and fire as he applies a deep insight and historical sensitivity to each performance.

Quigley’s articulated, richly expressive forewords take audiences on journeys through time and space as he elaborates on the history behind each show’s central theme. The beautiful music is then presented by the choir and orchestra with venturesome, commanding approach, which gives continuity to his narrative.

In May 2006, the group was awarded the ASCAP/Alice Parker Award for Adventurous Programming.

In the landscape of American classical ensembles, few groups can match its commitment to versatility. Seraphic Fire defies conventional programs with an almost insolent series of performances spanning from sacred and secular choral works to Iranian folk songs to contemporary Haitian composition. The ensemble has become known for marching to a fiery beat, often reigniting typical classical fare with funky arrangements and distinguished new works.

“It is like going to the movies, you don’t know how the story will develop,” said James Bass, the group’s chorus master.

Bass, who has been with the group for the past 8 years, works closely with Quigley to expand the group’s repertory horizons.

In 2007, the group began touring nationally and decided to incorporate a orchestra to its ensemble. With a $250,000 grant from the Knight Foundation  the Firebird Chamber Orchestra was created, making its debut the following year.

In this season’s program choir and orchestra have honed refined interpretations of classical masterworks, from Bach’s St. John Passion to Purcell’s King Arthur to Off’s Carmina Burana. The list also includes original performances such as Out of Babylon, a documentary in music tracing a Jewish family’s personal diaspora from Babylon through India, Singapore, Australia and finally Miami Beach.

In His Eye is on the Sparrow, the ensemble takes the audience on an intimate journey, answering the question “Why do I sing?” Through a combination of hymns, folk tunes, and popular songs, the musicians offer a glimpse into their upbringing.

“The series is broad enough that anybody could come in and not feel out of their element,” said mezzo soprano Misty Bermudez.

The ensemble will perform at venues in Miami Beach, Coral Gables, Key Biscayne, Ft. Lauderdale and Marathon. Also featured are a series of guest star performances such as the August piano recital by Scott Joplin.

Joey Quigley, a singer baritone who has performed with the group for the past 3 years and was recently appointed artistic administrator said that new talent is regularly incorporated into the ensemble, as some concerts call for a larger group – some as many as twenty-five musicians.

“I think the biggest incentive to become one of our ‘choral ninjas’ is the challenge of tackling a demanding repertoire almost on their own,” said Quigley, Patrick’s younger brother. “Not every musician can cover almost 400 years of musical history.”

The ensemble also distinguishes itself with the personable interaction its performers offer the listeners after each show, which also contributes to a thorough understanding of the central themes.

The group’s appreciation of a diverse audience is also notable – free rush tickets to the youth are available 10 minutes before each performance. The choir became better known among young audiences after it broke into pop music and became the second in history to ascend to Billboard charts with its collaboration with Colombian singer Shakira on the first track of her platinum album, Oral Fixation Vol. II.

This past May Seraphic Fire ventured on its first international tour with a series of performances in Mexico. Quigley said the group is committed to expanding its touring schedule and has signed onto the roster of Barrett Vantage Artists, one of the top five classical music management firms in the country.

This year also marked the organization’s initiative of adding an educational component to its increasingly ambitious presence in the South Florida community – the Miami Choral Academy. A music integration program in partnership with Miami-Dade County Public Schools, the initiative focuses on the assimilation of fundamental concepts shared between music and math, language arts, history, movement, theater and visual arts.

“Our work with the children is based on the premise that music has the power to make changes in society,” said Shawn Crouch, director of the academy. “Everybody has a voice that can make a difference and music can help bring that out.”

The 200 students enrolled were chosen from four host schools in inner-city communities: Citrus Grove Elementary, Lorah Park Elementary, Morning Side Elementary in Miami, and Natural Bridge Elementary in North Miami. Another two school partnerships are to be announced in the spring.

Crouch, composer of the 2005 Seraphic Fire Pulitzer-nominated work The Road from Hiroshima: A Requiem said that besides a strong musical background, the weekly sessions will help students develop self-confidence and discipline, and offer a well-rounded historical tour. Following on the best Seraphic Fire tradition, the academy’s repertoire will range from opera to pieces written during the Holocaust to staples such as Carmina Burana.

“As a composer I’m able to write difficult music for Seraphic Fire and know it will be learned and performed well,” said the 33-year-old New Yorker, who relocated to Miami to lead the academy. “We want these kids to have the same diverse musical skills.”

The group anticipates several performances supported by the Parent Choral Association, where families and friends assist with organization and fund-raising throughout the year. The most distinguished children will also be given the opportunity to audition for an “all-star” choir, focused on a more challenging repertoire that will allow for collaborations with other professional arts organizations.

“More than anything we want this to be a positive experience for the kids”, noted Crouch.

“Music not only gives you skills to life; it also opens you up in a unique way.”

Nu Deco is back at The Citadel with for a night of music by Steven Freund, Caroline Shaw, and Jonathan Bailey Holland, a special collaboration with the eclectic indie-ensemble Hurray for the Riff Raff featuring Alynda Seggara, and … +

Black Violin is composed of classically trained violist and violinist Wil B. and Kev Marcus who combine their classical training and and hip-hop influences to create a distinctive multi-genre sound often described as “a classical … +

The most important innovator in jazz was saxophonist Charlie Parker, born in 1920. His centennial will be celebrated by an all-star band of exponents of his music. There is only one individual who unquestionably revolutionized … +