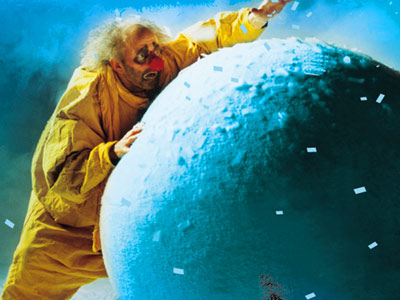 A cross between Cirque du Soleil and Blue Man Group, this entertainment phenomenon created by Slava, the original Cirque's clown genius, is an awesome theatrical experience and a profoundly moving spectacle full of wondrous images, delightful comedy, haunting music and snow – lots and lots of snow.

Slava Polunin was born in a very small town in Russia, far from all the big cities. All of his childhood was spent in forests, fields, and by a river. He lived in the world of fantasies, and liked to invent new things and make up stories. He would build 4-storey tree houses and snow towns, and organize funny parties for his friends.

Through TV and cinema he fell in love with the great clowns and mimes. To be a clown became his biggest dream. He was so passionate about this that he could not wait until he graduated. At the age of 17, he went to Leningrad with the intention of studying engineering. Instead, he joined a mime studio and so began his long-term quest to reclaim and re-establish the art and craft of the true clown. Influenced by great artists such as Chaplin, Marcel Marceau, Engibarov, and building on his innate talents, Slava and his theatre company, founded in 1979, took clowning out of the circus onto the streets, and from there into the major theatres of the world.

July 2010. This summer, when most companies are on break for a couple months, the dancers and staff of Arts Ballet Theatre of Florida are grabbing their passports and packing their bags, as they head … +