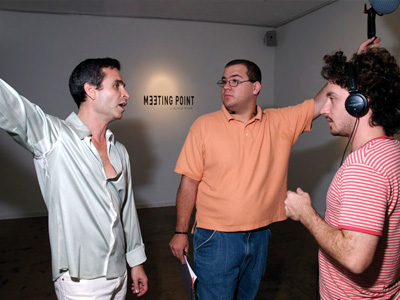 The directors of Dot Fifty One Gallery, Alfredo Guzman and Isaac Perelman, greet me on a rainy Friday afternoon with all the enthusiasm of art dealers who have an exciting, new project in the works. Dot Fifty One is located in an unassuming building on 36th Street, in the midst of the Wynwood Arts District, and focuses on showing conceptually based work by mid-career artists such as Leonel Matheu, Andres Ferrandis, and Ignacio Gurruchaga, among others. Guzman and Perelman’s latest endeavor, though, is one that will launch Dot Fifty One, along with Miami’s arts community, on to the small screen and in front of a global audience.

They have teamed up with Argentine producer Karina Castellanos and her production company, Nativa Productions, to create a series called Living in Art, a “docu-reality” show set to air on Lifestyle, a new cable network owned jointly by Playboy Enterprises and media company Claxon Communications. Guzman acts as the show’s host, guiding viewers through Miami’s thriving art world by way of its galleries, collectors and museums.

Alfredo Guzman and Isaac Perelman both hail from Argentina, and have extensive backgrounds in industries other than art. Guzman is an architect by training. When arriving to the states, he opened up a gallery south of Fifth Street in Miami Beach, and instantly sold work, from paintings to furniture. From there, knowing he was on to something, he opened up the Flower Bazaar, a boutique flower shop on 5th Street.

He now runs Dot Fifty One along with Perelman. “ My background is in advertising”, explains Perelman, “ and I did production for fashion and movies in L.A, then moved back to Argentina, and opened up my own marketing company. People started approaching me, asking me to help them get a show through my contacts”, Perelman says about his early days in the art world. Of the beginnings of Dot Fifty One, he adds “We did it slowly, and with one vision: to integrate the art community (of Miami).” This vision inspired Karina Castellanos, president of Nativa Productions in Buenos Aires. Castellanos has produced a variety of shows for networks around the globe. “I’ve had the idea for Living in Art for quite some time”.

“I noticed how the art movement in Miami grew larger and larger each year and that there was no audiovisual reference on the topic which would be able to transcend the city into spectator’s homes in different countries so that they could also experience what is happening in Miami,” says Castellanos. “ The goal is for people to become friendly with art, and enjoy it instead of feeling intimidated by it”, she continues.  So why did Nativa pinpoint this specific gallery as the show’s main focus? “Karina Castellanos is an old friend, and she approached us with the idea of producing a show about the art scene in Miami,” explains Guzman. “The program explores a gallery’s interaction with all the different cultural institutions of this city. It also shows how it’s easy to be a consumer of art, and that art can change your life,” he adds.

In each episode of Living in Art, Dot Fifty One is the starting point by which audiences can experience Miami’s cultural scene. Clips from the first episode introduce viewers to Miami’s art world by way of its collectors – namely, the Rubells. While many of us in Miami are familiar with their collection, for those who haven’t met with them personally will definitely find it interesting to see the couple talk about how they started collecting, why they collect, and what it means to be a collector. The second episode features a buyer from Russia, who is dead set on purchasing a sculpture for her husband’s corporate office in Moscow.
{mospagebreak}
Guzman’s goal is to convince the buyer to purchase an installation instead, and in doing so introduce audiences to the Museum of Contemporary Art and its director, Bonnie Clearwater, as well as Bernice Steinbaum and her gallery. Future episodes feature a collector searching for a Botero, and the gallery’s position of working with secondary-market art dealers, as well as the role of public art in Miami, gallery openings, the art walks in Wynwood, and other relevant topics. And that is just the first season. Lifestyle has signed on for another season of Living in Art, and production is set to start in December in order to cover Art Basel Miami Beach.

Isaac Perelman, under the direction of Castellanos, is not only co-director of Dot Fifty One, but is also the show’s Miami producer. “Everything that is put in the show is very well-thought out”, says Perelman. “Everyone who thinks of a reality show thinks (of shows like) Big Brother”, he continues. “This is a docu-reality (show) because everything on screen really does happen in the life of a gallery. The documentary portion (comes in to play) because we are interviewing the key people in the art business in Miami”. Perelman and Guzman have been heavily involved in the production of the show since day one, having shot a pilot and written a treatment for the first season in order to ensure the green light from Lifestyle.

For Miami’s art world, this kind of exposure can add to our city becoming a true arts destination, which means good news for local galleries and artists. Season one, which is scheduled for thirteen episodes, seems to cover faces and places that aren’t far from the beaten path. It would be great to see future programs feature less known or more underground artists and galleries, so viewers can see the flip side of Miami’s art elite.

The Lifestyle Network will launch in September of this year. True to its name, the network will feature programming targeted towards audiences who have niche interests similar to those found on HGTV, TLC, and Food Network. The network will likely be part of cable premium channel packages, so check with your cable provider to find out what channel you can tune in to see Living in Art.

It is no secret that a woman’s place in our society is constantly evolving through the efforts of strong and relentless pioneers. This evolution may not always be a fast and obvious improvement, but nonetheless, … +

The Wet Heat Project creates spirited documentary films, web destinations and events that explore an in-depth experience of the contemporary arts and artists of Miami, capturing history in the making… One story at a time. … +

At St. Cristopher’s by the Sea Church in Key Biscayne a palpably excited audience sits still in the dark. A group of singers slowly descends onto the stage – with candles in their hands, they … +

Performance art, by its very nature, is one of the most challenging avenues of expression. One part street theater, one part psychodrama, the best performances are always challenging and unique. At times, these pieces can … +