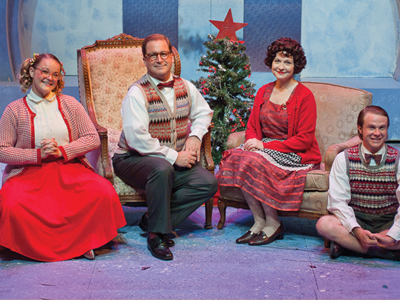 A portrait of the summer in Miami: The season begins at the multiplex, with all those movies suited for youngsters. Friends with means have skipped town, heading up to the cool of the Carolinas or Georgia. The rest of us get to bake under a blanket of humidity when we’re not dreaming of that next Mojito.

But take heart: there’s a way to escape the heat and feed your head at the same time. City Theatre, the local award-winning ensemble, is offering several weeks of live theater that can fit easily into anybody’s schedule. It’s their sixteenth year of presenting the annual Summer Shorts Festival, which comprises thoughtful, entertaining plays – most under twenty minutes. And this year has both fresh, new works and proven crowd-pleasers to offer.

Over the course of about five weeks, from June 2nd to July 3rd, patrons will be able to take in fifty-five comedies, dramas and everything in between, but in condensed form and at non-theater prices. Summer Shorts features seven short plays, all done in conjunction with City Theatre veterans Ceci Fernandez, Finnerty Steeves, Steve Trovillion and Gregg Weiner. Last year’s hit rock-musical, Camp Kappawanna, returns for the entire family courtesy of co-creator Lisa Loeb; and Jai Rodriguez, best known for Bravo’s Queer Eye for the Straight Guy, stages his own late-night revue, Dirty Little Secrets.

The seven plays that make up this section of the program highlight a variety of new works, some of which were written by well-established playwrights. Stephanie Norman, co-founder and producing artistic director, is thrilled to present pieces written specifically to be under twenty minutes.

“We tout ourselves as America’s Short Play Festival,” she says. “The merits of a short play are that they really have to pack a punch. They don’t have the luxury of pages of exposition and character development. We have to start in the middle, and the play really has to hold your attention.”

Chosen for this year are Aboard the Guy V. Molinari by Bara Swain; Chronicle Simpkins Will Cut Your Ass by Rolin Jones; Dos Corazones by Richard Hellesen; What Strong Fences Make by Israel Horovitz; Quiet, Please by Garth Wingfield; Hate the Loser Inside by Jon Kern; and Mickey Herman Saves the Universe by Marco Ramirez, who was discovered by Norman when he was in high school down here.

Chronicle Simpkins, about a mean girl and her posse, and Dos Corazones, a study about two new mothers, are audience favorites returning as Summer Shorts revivals. The five remaining are all world premieres.

“We’re very excited about the premieres,” says Norman. “The Israel Horovitz play is a world premiere. We get all these wonderful, wonderful plays and so we’re delighted to bring them to Miami audiences. We have a rock-musical that’s a world premiere in the festival. And the writers come from all over the country. Some are new voices that you haven’t heard of. We get people like Israel Horovitz or Rolin Jones, who was up for the Pulitzer Prize.”

If a Pulitzer could be given for Best Play Encouraging Audience Participation, it would be Camp Kappawanna, a fan favorite. It’s the creation of Grammy-nominated singer-songwriter Lisa Loeb and writer Marco Ramirez. They’re presenting a full-length rock-musical that found its inspiration with Stephanie Norman.

“A couple of years ago, Lisa had come up with a children’s album of camp songs called Camp Lisa,” says Norman. “We took one of her songs – Best Friend – and did it as a short in the program that we called 4 Kids, which we had been presenting a couple of years ago at the Arsht Center. Her music really resonated so well, not just with kids, but also with adults! I looked at it with my sound designer. He and I said to one another, ‘There’s a musical in the making with this soundtrack!’ So we went to Lisa and said, ‘What do you think about us developing a musical around this collection of music?’ And she said, Sure!”

“I’ve always wanted to write a musical,” Loeb once said. “I grew up listening to them – Annie, Grease, Bye Bye Birdie, You’re a Good Man Charlie Brown. And I definitely want to do this again.”

The piece debuted last year, and this romp about 12-year-old Jenny Jenkins sold out. It played to enthusiastic audiences who felt as if they had actually returned to a beloved sleep-away camp. Loeb co-wrote new songs for this current production and the script was tweaked. All the better, says Norman, because the interactive play virtually requires audience sing-alongs.

Camp Kappawanna, however, is one of the few pieces in which Jai Rodriguez won’t be appearing. He’s slated to bring his cabaret revue Dirty Little Secrets to the festival, and will also appear in several Summer Shorts plays with the City Theatre ensemble. Norman is an unabashed Jai Rodriguez fan.

Rodriguez is very comfortable with the work he’s doing here and is especially keen to perform in this area. “I know they were trying to broaden the spectrum of their audience and I believe they were looking for the perfect fit for someone who made sense in South Florida,” he says. “Also, I’m someone who does a one-man cabaret, and they wanted someone like that to be part of what they were doing. So it just ended up working out really well.”

“It’s not a solo performance,” he continues, “but it will be a solo journey of my life. Occasionally, the dancers will step in and play a character… There will be two dancers, two singers and the band, who will be onstage with me.”

Having done something similar years ago in New York City, Rodriguez has updated the book with more-recent details of his life’s journey. He describes the current version as a “narrative of my life… like an old-school cabaret, with cocktails and enjoying some great music, but hearing some naughty habits about someone’s life, too. So, although there’s some talk of sexuality – I think there’s a female dancer who’s partially nude at some point and a male dancer who’s partially nude at some point – there’s some levels of sexuality to it that are fun and tongue-in-cheek.”

A new section of the program is Citywrights: New Play Lab, which is a three-day symposium for writers. Coming in to lead master classes and workshops are playwrights Israel Horovitz and Lisa Kron. Larry Harbison, the senior editor for Smith & Kraus, the largest theatrical trade publisher in the states, will discuss publishing and copyright concerns. The Dramatist’s Guild of America, the professional guild for playwrights, is cosponsoring this forum along with City Theatre, so it has lent some of its leaders, such as Director of Business Affairs David Faux and Executive Director for Creative Affairs Gary Garrison, to lecture on trends and challenges in the industry. Literary Agent Susan Schulman will also be on hand.

Prices for the performances are $25 for Camp Kappawanna, $35 for Dirty Little Secrets and $45 for the short plays. Norman stresses that group discounts will be available. Everything has been done, she says, to encourage the entire family to come.

“Here in South Florida, we get in a car. We drive somewhere. We see something. We get back in the car. We drive home. So Summer Shorts has always been a great way to entertain people. You get a group of friends and you go to the theater. It’s social and it’s fun. It’s interesting… You get to meet the performers after the plays, and Jai comes out to meet the audience after Dirty Little Secrets… the audience gets involved and everybody’s talking to their friends!”

Rodriguez is equally as enthusiastic. “Having the opportunity to do Summer Shorts is like going back to my roots. They were very careful about the pieces they selected. Some are funny and light, but there’s one in particular – What Strong Fences Make – that’s really quite serious, heart breaking and so well written. It’s really great!” he says.

“The great thing about Summer Shorts is,” says Norman, “we laughingly sort of say that Summer Shorts is perfect for today’s society because it’s the remote-control generation. But while it is short-attention-span theater, we say to people: If you don’t like one play, hold on. The next play is coming in eight minutes!”