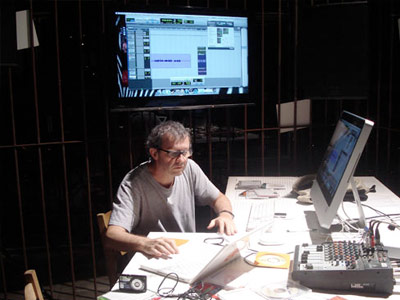 The Cabinet of Dr. Strange is a video/sound performance created for an urban environment, performed by Tragtenberg inside a large cage. The purpose of the piece is to create an ironic situation regarding the presence of art and the artist in the contemporary world. Inside the cage, Tragtenberg establishes a special relationship with the audience by using an open microphone. The audience is free to sing, scream, etc., into the microphone. Dr. Strange then processes these sounds within seconds. The piece establishes a dialogue of humor, irony and surprise. On the side of the cage, signs read, “Please feed the composer with images and sounds. The composer is an extinct animal. Come and share your sound problems with Dr. Strange. Dr. Strange will solve your sound problems.” The Cabinet of Dr. Strange premiered at the 29th International Bienal of São Paulo, Brazil, in 2010.

Livio Tragtenberg resides in São Paulo, Brazil. He began his musical activities in São Paulo in 1979. His musical research is related to new sounds and such diverse creative languages as poetry, film, theater and dance. He has collaborated with magazines, authored books related to music and arts and played many concerts in South America, North America and Europe. He has held the position of Professor of Musical Composition in the Music Department at the Campinas State University (UNICAMP) since 1989. In 1988 he received a VITAE (Rockefeller) Foundation Fellowship for the composition of Wall Street Inferno based on Joaquim de Sousa Andrade’s text. In 1990 Livio received a Guggenheim Fellowship for the composition of Utopia. Since 1993 he has been composing music for large music, dance and theater projects in Berlin, Frankfurt, Bremen, Hamburg and Stuttgart, Germany. Among his recordings are: Pasoloni Suite, Hansel Und Gretel Suite, Othello, Anjos Negros and TemperaMental, a recording of an interactive theater piece performed in Brazil in 1993. Livio has authored two books Artigo Musicais and Contrapunto – Uma Arte de Compor.

The Academy of St Martin in the Fields is noted internationally for its refined sound, rooted in outstanding musicianship. It was formed by Sir Neville Marriner in 1958 with a group of London musicians who … +

Symphony of the America... +

Broward’s longest running Summerfest is back, presenting its 26th annual festival, for one month of performances throughout Florida and the Americas. Nourish your artistic soul with the Symphony of the Americas, a Broward County designated … +