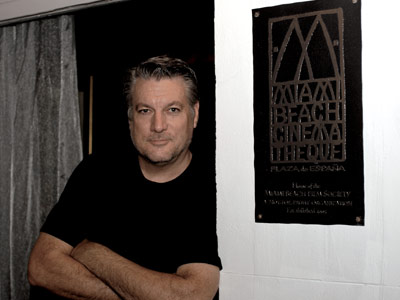 Fans of indie films in Los Angeles know to go to the Nuart. In New York, the Quad Cinema is the movie house for those with a taste for the unique. On Miami Beach, there is a theater dedicated to showing non-commercial movies and much more: the Miami Beach Cinematheque on South Beach. And it’s due to the determination and vision of one man: Dana Keith, the founder and director of the Cinematheque.
Keith happily recounts his love affair with cinema, which started when he was very young. Not only was he entranced by film, he was enamored of all things cinematic. A collection of souvenir programs, started when he was a child, eventually grew to be thousands of pieces that would cover the entire history of film. Encouraged by his father, Keith continued to study film from the inside out: He attended the University of California, Santa Barbara and did a double major in both fine art and cinema. A short stint later in film production at Paramount Studios was cut short by his desire to go to Europe as a model and a photographer.

Europe fired his ideas even further by nurturing film interests at virtually every turn. Keith once said that its influence was overwhelming. “I stayed 10 years…and all my spare time was spent in cinemas and film museums and archives and collector’s galleries and auctions and film festivals!”

His success in modeling brought him to Miami Beach, which impressed him with its myriad influences: South American, Caribbean, and European melding together to make a unique city. He immediately founded the Miami Beach Film Society, a “homeless” society with no specific address. The MBFS was the vehicle Keith used to create events that would foster awareness of films and other cultural events. Of particular interest were other film festivals and programs that showcased alternative and unique forms of cinema. Whatever was not being played by the major chains was what Keith sought.

The MBFS helms a number of different events to foster a cultural atmosphere similar to those art spaces Keith enjoyed so much in Europe. Performance art, live music, and dance programs are scheduled routinely. For example, the history of Miami Beach was shown through Vintage Films In Art Deco Spaces and The Esther Williams Film Festival at Miami Beach’s Swimming Pools. Other programs highlighted the Spanish experience with Café Con Cinema, Jewish history with Judaica On Film, and films of particular interest to South Florida’s gay community with A Nite OUT.

Miami can be a challenge, he says. It’s known, rightly or not, as Party Central for tourists and locals alike. People come to Miami to enjoy the weather, the beach, and the nightclubs – not for cultural events. But this challenge specifically enticed him: Put together a site for cultural affairs centered around film and those projects that bring film into their own environs.

To that end, Keith searched for permanent digs. Eventually, he found a home for the Film Society at the west end of Española Way, a Spanish-style street in the heart of South Beach. Española Way is a hideaway from the heat and noise of Ocean Drive and Lincoln Road. He calls it “my favorite little street, (with) an Andalusian feel.” At 512 Española Way, the MBC is in the storefront space of a Gothic-style building. His choice left him with no doubt that he’d made the right decision, but it came at a price. He and chairman Barbara Permagament had to get moving with serious restoration. The site Keith chose now houses the Society’s offices and the Cinematheque.

“The early challenge was to get the place open. We thought it would take a few months, but, in reality, to renovate a place from top to bottom required a year of permits, fundraising, contractors, etc. The place was falling apart, literally, and we restored it from top to bottom,” he says.
{mospagebreak}
The MBC opened in August 2003, on the tenth anniversary of the Film Society’s beginnings. Now with a permanent space available, Keith could let any idea take shape. Its 50 seats do more than simply allow people to sit for films. The entire space is given over to new ideas and wide-ranging discussions.

“The Cinematheque is a unique experience in moviegoing. It is a boutique-style gallery environment, which presents film as an art form, like a museum of film, in a way, so people are in an appreciative ambiance. Countless newcomers have commented that they have never quite had an experience like it, because most of the audience is aware and interested in cinema, and an audience member becomes part of that family.”

In an industry run on corporate-think and decisions by committee – usually the financial suits – the Cinematheque offers the chance to see unique and alternative visions of the world, both local and global. It considers itself a jumping-off point for other organizations and their projects.

“MBC is the most collaborative organization in Miami, because we work with all the film festivals as they come to town, as well as other organizations and even non-film-related entities that would like to bring film into their network of information.” Collaboration with other organizations, especially in a fragmented area such as Miami, is key to the success of the arts. Keith encourages partnering across the board as a way to make more artists and programs available to the public. Recent pairings ran the gamut from short films shown in conjunction with the Miami Italian Film Festival to Giving Visibility for Art Basel with video artists Michel Auder, Candice Breitz, and others, to an exhibition of Polish film posters from the 1950s to the 1980s.

In keeping with its history of partnering, The Miami International Film Festival joins MBC for its upcoming festival dates. The MBC space will be perfect for showing some of the MIFF’s most anticipated films.

“We are very happy to be working with the Miami International Film Festival on their 25th anniversary year on some exciting events,” says Keith, “especially those surrounding the amazing modernist English filmmaker Peter Greenaway, who will be the subject of our monthly Great Directors series, for the entire month of March. Patrick de Bokay, the new Director of MIFF, has been outstanding in his interest in outreach. It is such a pleasure to see that he understands the importance of involving the entire community, and he is wonderful to work with, being passionate about film showmanship and marketing; he is “on the same page” with MBC about those important ingredients to success!”

Keith and his associates are also passionate about film and success, but keep the needs of the community in mind when making decisions about scheduling. Film and arts choices are tailored for all members of the community, and the team at MBC is keen to bring into the fold as many members of the public as possible. Keith is an activist, promoting film education to further the art form for the viewing public, and education is offered as a matter of routine.

“We had been outreaching for years, all year long, but an exciting new element of our programming is the upcoming MBC Filmmaking Workshops, instructed by professionals Harriette Yahr and Dinorah de Jesus Rodriguez. MBC has always been an advocate of the art of cinema, the promotion of it as an art form, and now there will be hands-on opportunities to make films directly,” he says.

Because of the determination and foresightedness shown by Keith and his associates, South Florida – which has seen the deaths of too many art houses – has yet another venue for innovative, provocative cinema. It is a terrific challenge the MBC has taken on, showing arts classics and indie films in a town known for its beaches and fishing. But Dana Keith will have none of that kind of thinking. He wants to bring to fruition the best intentions of the MBC: the education and entertainment of the community through the art of cinema.

“We reflect the interests of our community and challenge it with new exciting directions,” he says. “Take, for example, the recent retrospective of Bruno Dumont. Most people here have never heard of Dumont, who has made only four films, but three have won major awards at The Cannes Film Festival. He is recognized for the importance of his new individual “film language”, his style in presenting in a completely unique way, and we are happy to introduce that to Miami audiences. On the other hand, we focus on the local interests as well, such as the creativity within the Jewish, Hispanic, and gay and lesbian communities. MBC is for everyone who enjoys cinema as art, and who would like to learn from cinema as a tool for information.”